“Man, you’re the only one still runnin'”…

Posted on December 27, 2017 by Christopher Cudworth 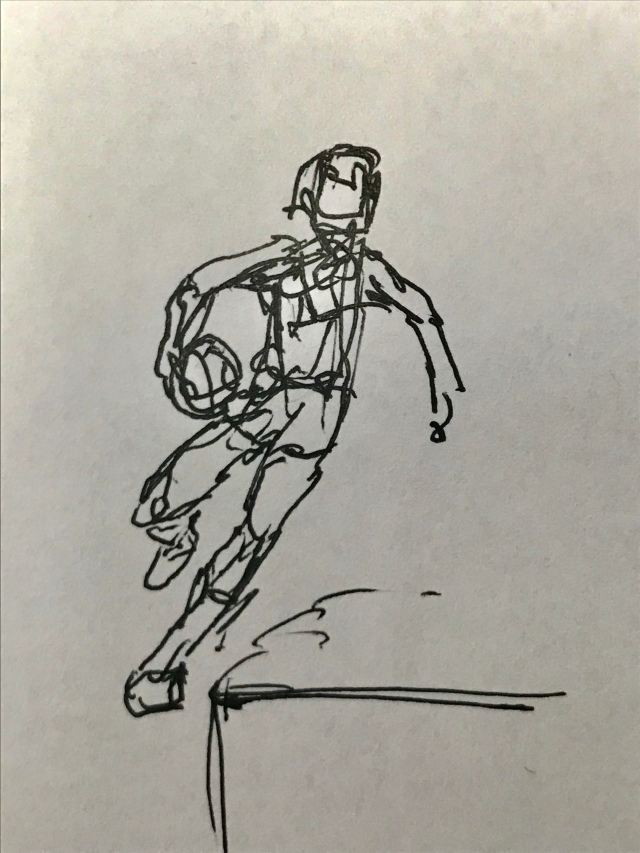 Basketball was once my favorite game to play. I grew up playing hoops from the time I was six years old. My scholastic career lasted until my senior year. That’s when I opted out of playing hoops in order to train for indoor track.

Actually, that’s a lie of sorts. I wasn’t going to play my senior year anyway. I’d blown off basketball camp that previous summer, and the coaches didn’t appreciate that much.  Perhaps that aspect of my life had run its course, so to speak.

It was also one of the ways I stayed in shape during the winter months.  All the cutting and turning and jumping was great cross-training. It was also great for balancing out biomechanical deficiencies. As a result, I believe there were far fewer running injuries than I might have sustained without all that lateral movement.

Playing ball was also good prep during my steeplechase career in college. Jumping barriers and leaping over the water pit were all complimented by months of playing long games of basketball.

Beyond the college years, my brothers and I would show up for open gym at noon and play multiple games over the course of six hours. That’s what Saturdays were for. Competition. It kept us sane.

My background in track and field and cross country did come in handy in the sport. Way back in high school during a game against a run-and-gun team from East Aurora, the bulk of our team was exhausted from trying to keep up. The East guys were having a high time trying to run the score up to 100, and I wound up under their basket standing out of bounds with the ball in my hand but no one from my team over the half court line. I clearly recall the broad smile of my competitor as he stood with his hands up, waiting to apply a full court press when he laughed, “Man, you’re the only one still runnin.’ !”

It was true. And I loved the comment. In fact, I would gladly have changed teams at that moment. The game of basketball is a dance anyway. There was nothing I loved better than to get the ball in open court and dribble my way through competitors on the way to the basketball. Throwing fakes right or left, going between my legs or behind the back on the way to the hoop. Finishing with a swoop or a pump fake to avoid the block. Nothing like it on this earth.

While I excelled some during those school years, even winning games on occasion with long, last-second shots the way everyone dreams while shooting around alone, it was well after college that I truly began to understand the game. Once while playing in a pickup match at our local sports complex, one of the high school coaches wandered through the gym and witnessed a series of plays in which I directed the action, leading to buckets each time.

When I walked off the court he smiled and said, “You know, maybe we made a mistake with you.” After all, my younger brother had been All State in Illinois and went on to play Division 1 basketball at Kent State University….

But I assured him otherwise. “Nope. I didn’t get the game back then. I was a good shooter and ball-handler, but now I get how it works.” We both smiled. Understood. 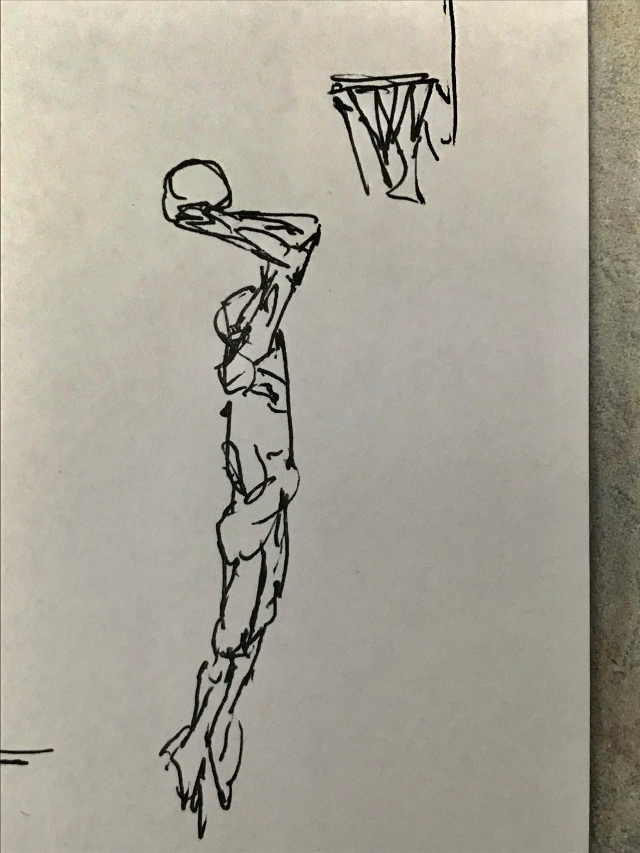 All through my 30s and early 40s I continued playing the game. We had a great Sunday night group with 25 or so players that would turn up at Harrison Street School to play from 6-9:00 pm. The games were always competitive and there were enough good players for the better players to match up, yet there were all levels of players and that was cool. All of us were married guys with kids back home. But our wives didn’t object to our absence on a Sunday evening once the weekend chores were done and the kids were pretty much settled down for the evening in front of the TV.

Somewhere in my late forties I hooked up with a group of coaches to play ball at the local high school. All of us were in the approximate same age bracket. Guys were starting to go down with injuries and pulls.

Later that year while playing in a really competitive pickup game I was super fit from all the basketball and running I’d done that year, and spent the game driving the action. I was feeling great when I got the ball at midcourt, drove to the baseline, jumped toward the basket and turned to make a reverse layup. But when I came down I felt a shot of pain under the left side of my pelvis.

Right away I signaled for another player to take over. That injury took several months to heal. I saw and ortho doc and he told me that it was some connective tissue under the pelvis floor. “Maybe you should take some time off,” he counseled.

So I backed off playing and fell away from the open gym life. I was busy with coaching my kids in soccer anyway. Perhaps it was time perhaps to hang up the high tops.

That would have been the final stage of a basketball career had I not been recruited to play in a men’s league with some guys from the outdoor soccer team I’d joined. By that point in life, I’d torn my ACL and had it surgically repaired, but was still hanging on with soccer. I took a bit more precaution in my cutting and turns on the basketball floor.

But the team was plain terrible. I tried desperately to keep us in games, but to no avail. Only once during the season were we even close to winning a game. But the minute I took a breather we went down 10 points in the blink of an eye and the rest was a frustrated whimper.

I no longer play competitive basketball. However there are mornings where I’ll grab a ball from the bin at the Vaughn Center. The courts are empty at six in the morning after my track workouts. I’ll shoot around and practice long-learned dribbling moves as the sound of the ball resounds off the gym walls. Occasionally another older player will be there as well. I’ll compliment them on their shooting form, and have learned through conversation where they played the game in high school or college.

For those of us with years in our legs, the hops aren’t really there anymore. Yet I can still jump and almost touch the rim when I really try. I recall the first time I could jump and touch the net while growing up in the game. That was a magic moment indeed. Then came the day I could touch the rim. At one point, I even executed a squeegee dunk because my hands were too small to palm the ball. 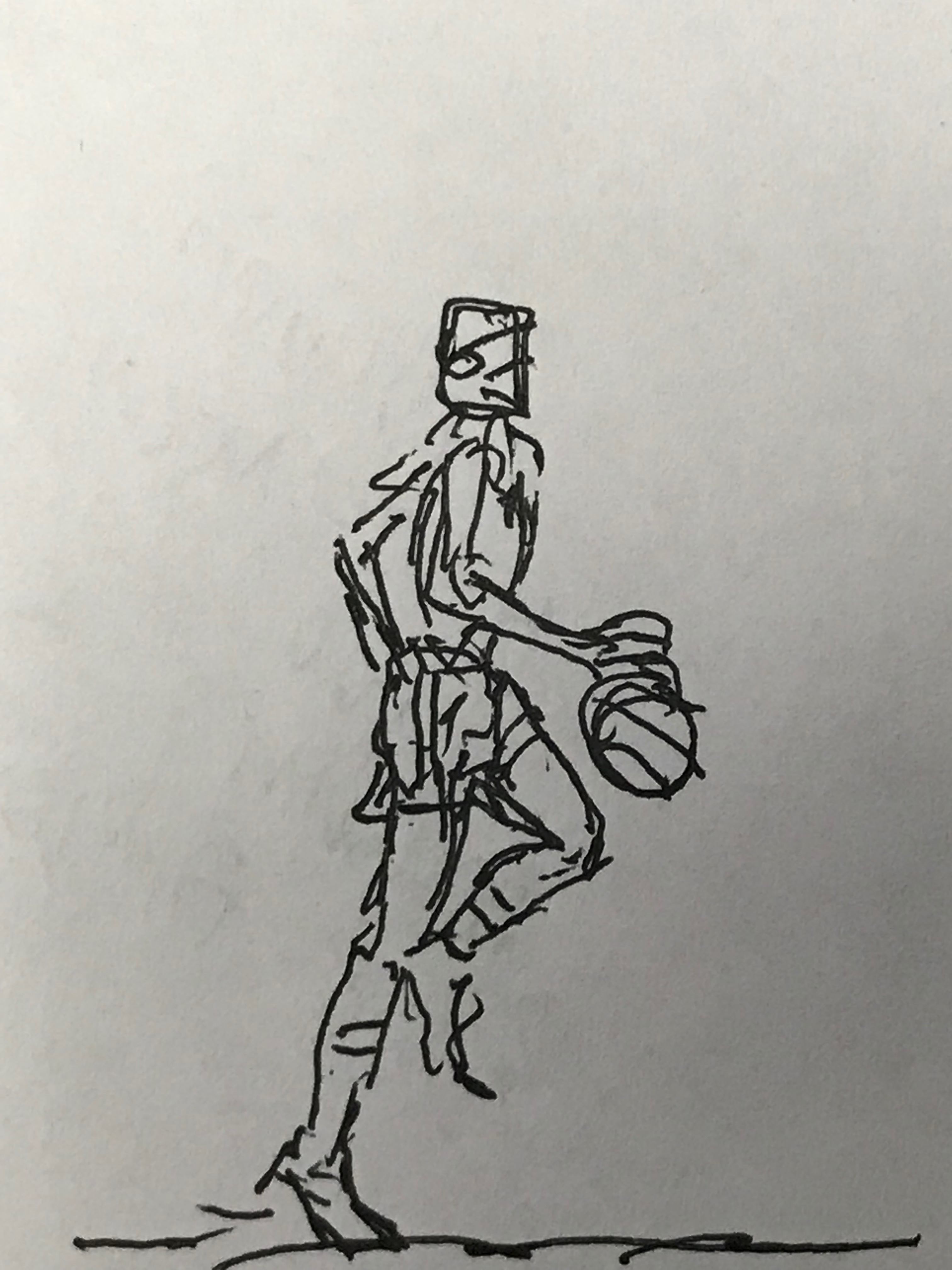 The death of Jake

I know that I could still run and play with the much younger generation. Not the best players, mind you. But the gym rats. That wouldn’t be a problem keeping up. It’s the stopping and cutting that are impossible. My ACL tore again two years after it was repaired. I’d given the cadaver part ACL installed in my knee the name “Jake”, and he died all over again. The death of Jake was also the death of ballistic sports in my life.

It still feels fun to dribble around and sink jumpers on my own. All those games and all that practice flow through my much older frame as if hard-wired into my being. And when I run back and forth on the court, it is so easy to recall the flow of the game and how my world revolved around the feeling and magic of basketball.