A Tale of Two Fitness Centers

Posted on December 8, 2017 by Christopher Cudworth

Last night I visited for the first time in a long time a fitness center to which I belonged more than twenty years ago. It was once owned by a friend of mine who bought the club with his credit card and built it up to 1000 members before selling the membership roll to a pair of developers with plans to combine that member base with another nearby club to wrap them together with an architectural plan and pitch nearby hospitals to build a medically based fitness center on property the developers already owned near a major road.

Those plans went up in smoke when the developers refused to give the most interested hospital any money for use of their name. Perhaps there were other factors at work as well, but declining the hospital any value for their name was plain selfish and stupid.

And then the hospital approached the same architect that had drawn up the fitness center plans, flipped the design around and built the damned thing right on their own property. So it all blew up in our faces, because I’d been hired to run the marketing once the thing got pulled together. I’d been successful marketing my friend’s club for several years. So it all made sense.

My friend got out of the fitness business after that. He sold the original club to someone else in the very same property in which he’d operated. Virtually nothing’s changed about the place in all those years with the exception of some slapped-on signage.

The club is situated in a grand old limestone building constructed in the late 1800s. It has a nice patina on the floors from the days when real industry spilled stuff and didn’t clean it up right away. The wood is dented and blackened by the boots and tools of hard labor, and the walls were cut from river limestone one mile south of where the building stands today. So I’m not criticizing the place based on its location or appearance. It just can’t compete in many ways with what health clubs have become today.

It’s a lowbrow place in other words, but I’ve still joined for a couple reasons. The fitness center to which I have belonged for a year is two miles from my home but more than six miles from where I work. It isn’t practical to drive all the way out there during lunch and back to do a workout.

Now that I’m on 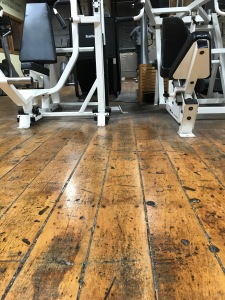 the health plan with my employer there’s a monthly stipend of $25 to pay for fitness center membership so it makes sense to point that toward the local club where I can get a workout in during the day if I like. Membership there is exactly $25 per month.

The nearby club sits between two of the area’s busiest bike paths, so I can get in runs and even rides during the day as a counterpoint to the workouts I do before dawn or after dusk on cold mornings in winter. Because I really want to lose some of the pudge I’ve gained around the middle. I’m frankly disgusted by it, and that requires an increase in intensity these next three months.

But the old club is a brain rush for me. Walking in there reminded me of how long I’ve lived in this area, and how many years I’ve schlepped around fitness clubs doing my little weight workouts and perhaps jumping on the treadmill now and then. Once I actually slipped on the treadmill at the old club. I fell to the deck and the belt shot me

hard against the wall. My feet punched a hole in the drywall. I was so shocked in the moment that I drove straight home clutching my shoulder, which really hurt. Then I called my buddy who owned the club and said, without explanation, “I just put a hole in your wall.”

He actually laughed when he heard how it happened. I’d been running 6:00 pace on the treadmill when a gorgeous woman showed up beside the treadmill to ask if I’d be long. Well, I got distracted and down I went.

“Serves you right,” I think he chuckled. But now that I’ve confessed that little tidbit I can probably never run for local public office. I was distracted by her ample cleavage when it happened. So there, I said it. I was forty years old and stupid at the time. But I guess I can still be president.

Well, the Little Health Club That Could keeps trundling along. And despite its somewhat sordid history in my mind, it’s an okay place to work out. The locals don’t seem to care that it’s not the height of luxury. Some of the equipment is beat up. While doing shoulder

lifts I brushed against the bar end of a machine and the black plug that seals the metal tube fell off. Oh well, I thought, and put it back on.

By contrast, this morning Sue and I visited the other health facility to which we belong. It has a 200-meter indoor track, a wonderful pool and is one of the most clean and well-run facilities you can imagine. The park district that runs it wins awards every year for the quality of its organization and programs. The population of members is diverse and so is the staff. You just get a good feeling going into the place.

Sue and I ran a workout of 8 X 400 at her race pace. The indoor track is excellent for workouts like that. There’s also a jogging track upstairs for people who just want run without worrying about lap lengths. Yet many mornings when I arrive the track team from the university nearby is having practice in both the track and field events. It makes me think back to days of college competition, and I stop and encourage those athletes because it’s interesting to hear their stories.

So I can see the value of both types of facility in this world. The local, privately owned health club cuts the mustard for many people. I don’t think it’s got the same energy as when my friend owned and ran the club. He had trained fitness coaches on his staff, and there were classes of all types.

But I can imagine the cost of joining the larger facility with the track and pool would be exorbitant were it not a publicly funded facility. I’m grateful that local government does things the right way. Grateful such nice facilities are not priced through the roof.

What I’m saying is that while privatization does many things well, the public good is often served very well by people with a commitment to the intelligent proceeds of government. The same holds true with public lands and national parks, monuments to protect archaeological treasures and national wild and scenic rivers to preserve shores that might otherwise be buried under housing or commercial development.

There seems to be a big rush to sell off everything in sight in this country. But I’ve seen what happens firsthand when greed is the only motivator. Neither the public or the private good is always served. We see evidence of this fact almost every day. From corrupt red-light camera operators to pastors flying private jets while people all around them starve, greed is not always good. In fact, it screws up a lot of things in this world, even families, friendship and religion.

My Tale of Two Fitness Centers illustrates that for me in fullness. Feel free to counter if you like. I know there are people who think everything about government is bad. But I’ll take Glacier National Park in a bet against a private golf course any day of the week.

Christopher Cudworth is a content producer, writer and blogger with more than 25 years’ experience in B2B and B2C marketing, journalism, public relations and social media. Connect with Christopher on Twitter: @genesisfix07 and blogs at werunandride.com, therightkindofpride.com and genesisfix.wordpress.com Online portfolio: http://www.behance.net/christophercudworth
View all posts by Christopher Cudworth →
This entry was posted in healthy senior, training, training for a marathon and tagged A tale of Two Cities, A Tale of Two Fitness Centers, fitness center management, fitness club, medically based health club. Bookmark the permalink.