Down by the river

Posted on November 20, 2017 by Christopher Cudworth

I’ve always lived fairly close to water, especially rivers. It is fun to run along river trails because there is always something to see. This is especially true as my avocation is birding, or birdwatching. Rivers attract birds because of food resources ranging from bugs that fly over the water to the berries that grow in riparian zones.

In our area we’re blessed with trails that run 40 miles along the Fox River. The Fox is a decent sized river, usually 250 to 400 feet across. In many places it is funneled through cities such as St. Charles, Geneva, Batavia and North Aurora, the town where I now live.

One of our favorite running routes starts next to the bridge in North Aurora, travels 3.5 miles up to Batavia and comes back down the east side. The west side is flat, occupying a former railroad bed converted to a bike path. The east side is hilly because the trail leaves the river edge and loops up and through a climax forest of oaks, maples and hickories. Red Oak Nature Center and other forest preserves occupy about two miles of this stretch of river. 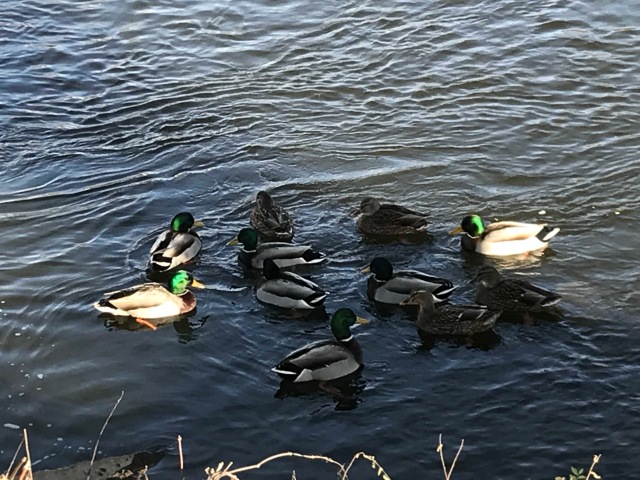 There is plenty to see in all seasons. Even in winter there are ducks such as mergansers, goldeneyes and huge flocks of Canada Geese. The mergansers fish in the open water and are easily spied as their sides are bright white.

I can’t count the number of miles run on these trails, but they were constructed in 1981 and that’s 36 years ago. It’s no stretch to say that in all those years I’ve covered at least 250 miles per year on those river trails. That’s 9,000 miles of running along the river.

Only in the last 15 years have I cycled so much, but that probably constitutes another 10,000-20,000 miles of “river time” along the Fox River Trail.

They hold a really great marathon here on the river trails. It’s largely a flat race, yet really scenic. It’s pretty hard to find that combination, and the September date has largely avoided high heat. Often it’s been quite cool.

But I’m not a marathoner, so the races I’ve run on the trails include mostly 5Ks and 10Ks. That includes perhaps the best race I’ve ever run, a 10K held in the first few years the trails were even open. With a superior competitor on my heels the whole last 5K, I managed to win the race in a record 31:52 that lasted for a couple decades before they shut the race down after 25 years.

I’m not that fast anymore but still managed a 20:50 5K last spring in a little 5K race held on the popular loop up from Batavia to Fabyan Forest Preserve and back. It crosses the river on a girder bridge with wooden slates, swings on a one lane road across an island and comes back down the west side where boat houses and duck blinds once lined the river.

Over the years I watched those old structures decay and fall into the river. The gray wood cracked and bent in places, then tumbled into the water. Come spring a big flood would wash away the weakened structures bit by bit.

But some things never change. The light on the river is always beautiful in every season. So is the mist and the sky above it. There are gulls that snatch fish where they can, and large flocks of swallows made up of six different species at once.

So I’m grateful to live here, and thankful to have such a beautiful place to run and ride. But I’ll leave the river swimming to someone else like the turtles, the fish and the geese that now dominate the river.