On skunks and pissing matches

Posted on November 8, 2017 by Christopher Cudworth 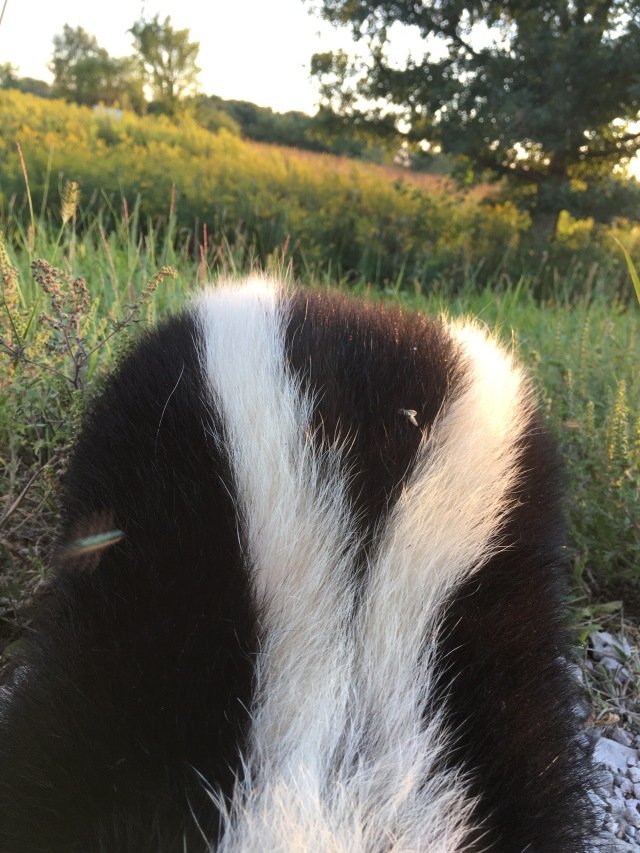 Last Saturday evening, my daughter’s boyfriend Kyle opened the deck door of their condominium to let the dog Chuck out for a pee. In a second, Kyle realized the danger that lurked outside. Chuck burst out the door straight into the rear end of a skunk. And got sprayed. Badly. Right down the front of his face and chest.

Kyle scooped him up and rushed Chuck straight to the tub. But as many dog owners have learned, that’s actually something of a mistake. Skunk smell permeated the apartment and everything in it. That included the clothes of my stepdaughters Stephanie, Sarah and boyfriend Boone who had just arrived for a “Game Night” only to find a chaotic scene of overwhelming stench.

To their credit, the kids all worked together. Steph and Sarah ran out for “supplies” to wash Chuck down. That process would end up lasting days. The kids also came home smelling deeply of skunk while Emily and Kyle either washed their belongings several times or tossed things out of their condo.

I’ve never had the misfortune of being nailed by a skunk. But living with four cats has its moments too. Whenever the kitties get competitive or dissatisfied with something in their cat kingdom, they sometimes piss on things. They can be cute as heck, but they’re still animals. 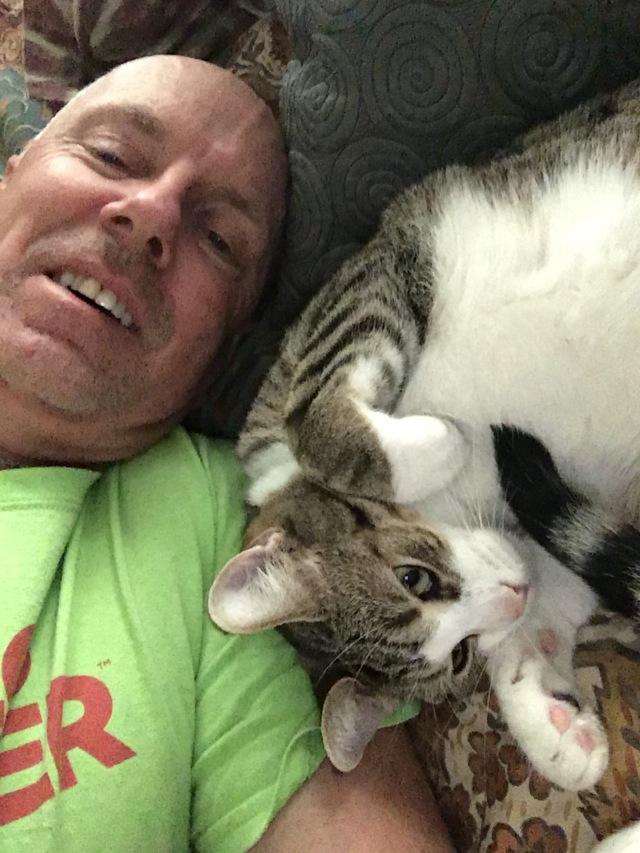 We human beings think ourselves above such animalian conflicts. But spend a week on Facebook during a political election and the pissing matches are frequent and fierce. It’s the same principle. People protect their personal pages by pissing around all the corners like a dog in a yard. Yet some people seem to relish going around pissing on other pages. We call them trolls, but really they are junkyard dogs marking their territory.

It’s a different phenomenon at any race where lines at Porta Potties form and disperse. Human beings have developed conventions to manage our animalian instincts. We know how to form lines and conduct social activities according to socially acceptable rules. 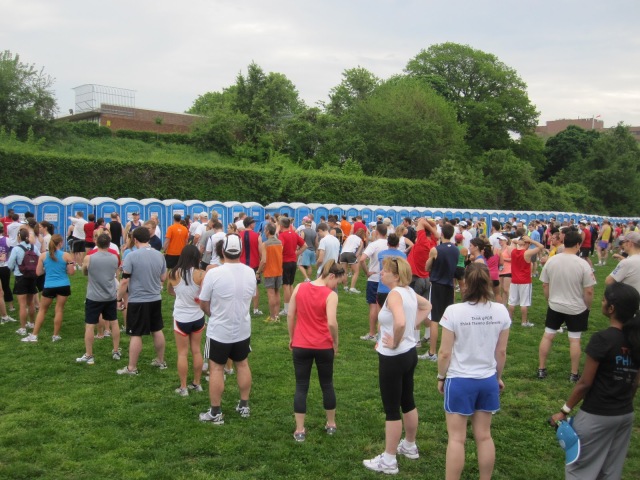 But have you ever been in a Porta Potty line when some preoccupied athlete ignores all the people waiting patiently in line and jumps into a potty without noticing there are perhaps 75 people patiently waiting in line? The grumbling is profound. If people had their way, they’d probably piss on the back of the line cutter.

Fortunately doesn’t happen often because most people at races understanding the pissing (and shitting) protocols. They understand that their needs don’t trump the needs of others when it comes to potty access. If only that were the case in the rest of society.

In other parts of society, those lines aren’t always so clear. Sometimes there are whole groups of people who decide the conventions of culture and law do not apply to them. Or, they make themselves jealous, bitter or selfishly possessive of some perceived position by imagining that others somehow have advantages they do not. 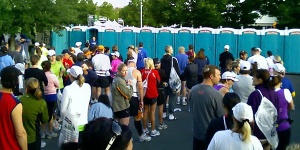 It’s bad enough when one person cuts the lines at the Porta Potties. But imagine if a whole group of people walked out from behind the johns and took up positions in front of the already established lines. People might attempt to shout them down. But a really belligerent group can be a difficult force to confront or manage. And think: the people in the Porta Potty lines don’t have an already established group affiliation. That means someone either has to organize a consensus on the spot or the more aggressive group simply owns the day.

But imagine if that Porta Potty takeover started occurring at every race you attended. That might really piss you off. And let’s imagine it’s a team all dressed in one color. You’d start to wonder who the hell they think they are.

Sooner or later, someone would confront them. But things get complicated when they claim:  “The organizers said we could do this.” They might be lying of course., which is one thing, or they might be telling the truth, which is a whole different issue.

Everyone at that moment could be struck with doubt about the circumstance at hand. Is that true? Should we fight this? Who ever heard of such a thing?

The rational approach would be to contact the organizers to find out if any such privilege exists.

The liberal approach would be to ask the offending group to prove their right to butt in line, and if no such proof exists, conduct a sit-in right in front of the Porta Potties.

The conservative approach would be to demand to see Porta Potty Privilege documentation and find out where to get it so that next time one doesn’t get left out.

The radical approach would be for everyone who is already in line to drop their drawers and take a dump or piss on the spot. That would apply to women and men, trans or otherwise. The nickname could be #antipotty. 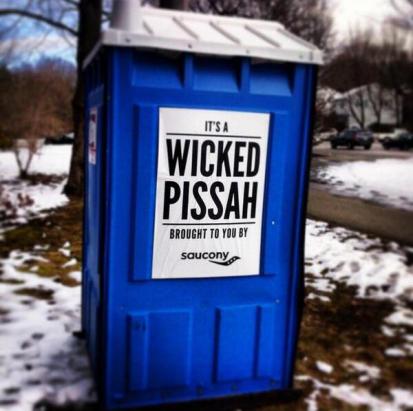 So there you have it, a breakdown of how pissing matches start and how they break down along social structures. You can apply these principles to just about any social issue on the landscape. But it all comes down to animal instincts.

We all know that animals piss on things to mark their territory and to establish a sense of ownership. This sense of “ownership” crosses all sorts of boundaries. The instinct to possess and control is a powerful drive and heavily dominated, in the human realm, by testosterone, to be honest.

We see continually evolving examples of men pissing on things  that they think they own. Some inevitably come to think they  “own” women as a right. The recent revelations on sexual harassment are one example. Harvey Weinstein does it in Hollywood and Illinois politicians do it in Congress.

And the same brand of men who are harassing women right and left are all too happy to use their position in life to effect methods of control over women in society. That’s why some men feel justified passing laws limited reproductive rights and birth control. It’s all about expressing that sense of ownership. And women have a right to be pissed about it.

Want proof of how radical this sense of “ownership” over human rights can become? In Texas, lawmakers signed into law a bill that amounts to forcing women to essentially buy “rape insurance” in order to protect themselves in the event of impregnation from a sexual assault. A story on The Hill describes it his way:

“Just this week, Texas Gov. Greg Abbott signed into law a bill that prohibits health insurance companies from covering elective abortions of any kind. This includes insurance plans on the ObamaCare exchanges and even private employer-based plans.

“Lost in that line of reasoning, however, is the fundamental concern for a woman’s most basic human rights. Smithee’s law purposefully does not make any exceptions for an elective abortion even in cases of rape, incest, or severe fetal abnormalities.

The bill is egregious in its use of euphemism to make the case that tax money is the real issue.

“Proponents of House Bill 214 are hailing its passage as a victory for state taxpayers, who are no longer compelled to subsidize medical procedures that they may find morally objectionable. Lead author Rep. John Smithee (R-Texas) even called it an exercise in “economic freedom.”

The use of the euphemism “economic freedom”  to protect those who might not believe in reproductive rights for women is a pathetic attempt to distract from the broader claim that “we own you.” Texas legislators have argued that even in cases where the death of the child they bear is an absolute certainty, a woman does not get to make that decision for herself.

The Hill goes on to describe the fact that rational minds could make no impact on the forcefulness of the legislators pissing all over women’s rights.

“The bill was heavily debated in both the Texas House and Senate with Democratic lawmakers repeatedly bringing this issue up to the Republican majority. Rep. Chris Turner even argued that forcing women to, “buy supplemental insurance to cover that horrific possibility [of rape or incest] is not only ridiculous, it is cruel.” He was soundly ignored.”

You might think my example of the Porta Potty pissing match an exaggeration or some sort of comic attempt at explaining morality issues. But it’s not. One can easily see how the perception of rights migrates from a sense of either personal privilege or ignorance to laws that impact the lives of millions of people.

There is nothing sophisticated or insightful about any of this. It’s a culture-wide pissing match in which people applying black and white standards impose their will on issues that are clearly gray by definition. Every personal decision is by nature a blank slate from the start. No harsh set of laws based on some sense of perverse ownership justifies the hollow morality inside. In fact, those that lack compassion simply stink. 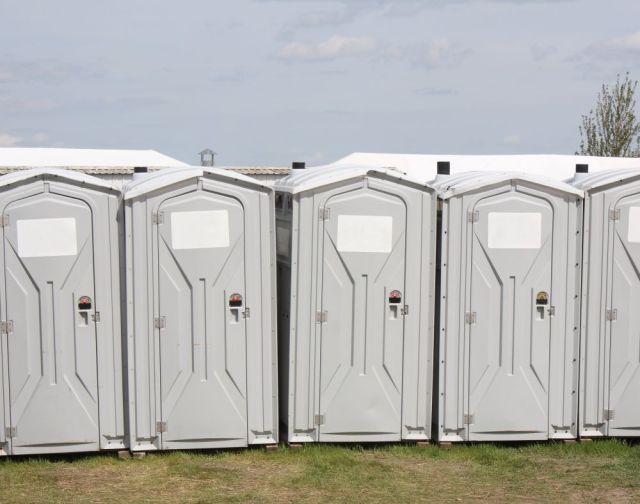 Outside the law, there are culture wars at work every day.

Next time you witness a social media fight between people who disagree, or next time you see Tweets from president who is pissed off at the media, pissed at North Korea or pissed at the NFL for not making players stand up during the national anthem, take a moment and consider what’s really happening. Consider how your dog walks around the property raising a leg and pissing on the fenceposts. Consider how that skunk raised its tail and impacted the lives of so many people in an instant.

In the end, it’s all about the degree and level of stink you can create when it comes to a pissing match. Some people seem to love living like this, with everyone encouraged to piss on the other or worse, raised a gun and shoot 26 people in the church because you think life stinks. It’s all animal instincts gone wrong.

And right now, the animals have the upper hand, and they’re aiming at you.