Posted on October 31, 2017 by Christopher Cudworth 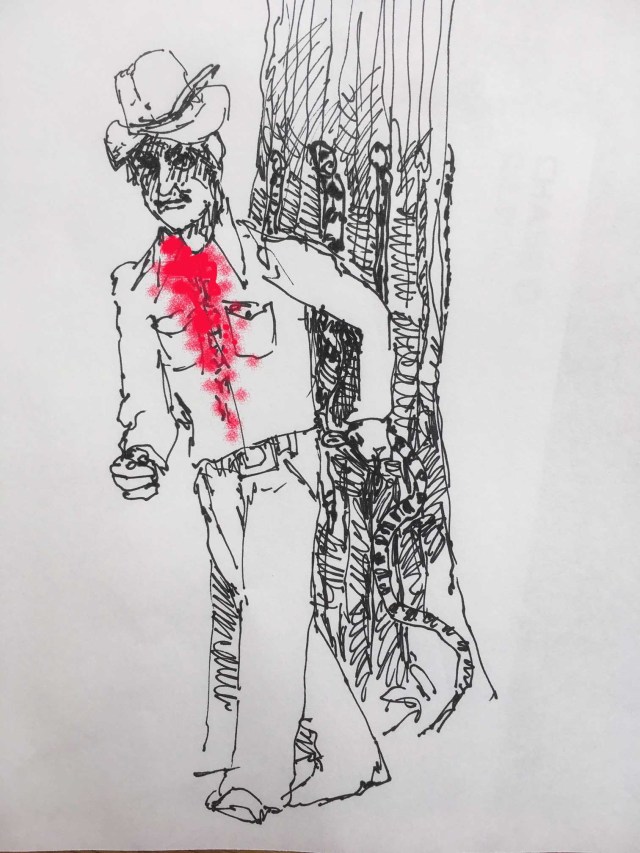 This morning I listened to a Radiolab program comparing the Orson Welles radio broadcast War of the Worlds with the more contemporary (though barely) Blair Witch Project movie. The common premise of the two presentations was creating an environment in which people actually want to believe in their fears.

It’s all accomplished by mimicking reality in ways that leave open the question of what is real, and what is not.

That is why I’m going to share with you a frightening experience I had while running many years ago. The events that took place absolutely happened, but many people find them hard to believe.

I was running a familiar loop of six miles that I knew by heart. It was a warm spring day and I was on my own because the track season was coming to an end with nationals approaching in a couple weeks.

So my brain was on automatic when I turned onto the last hill heading toward home. It was a 200-meter climb up a 6% grade on a gravel road carved from the base of a limestone bluff. The hills around Decorah, Iowa are rife with such scenes, with dark shapes of cedar trees clinging to cliffs punctuated with the skeletal trunks of ragged birch trees poking out here and there.

As I neared the crest of the hill a lean figure appeared at the top. He jumped out from behind a large tree that had grown from the ditch and shouted “Hey!” as he leapt in front of me and waved. “Do you wanna see mah snakes?”

He was dressed from head to toe in a white cowboy outfit. Even the boots were white, as well as the tall hat on top of his head. He was a bit of a startling sight because people in white cowboy outfits don’t pop out from behind trees in Iowa. Maybe that happens more often out west in Utah or Colorado, Wyoming or Montana. But not in Iowa.

The sight of this particular cowboy dressed in white was disturbing in another way, because a long, red trail of red coursed down the front of his outfit.

I quickly made plans to run past him but he was quick on his feet and blocked me on the road. That’s when I saw what looked like a knife in his hand, or it could have been a hammer. It was hard to see in the late afternoon shadows.

Then he pointed again at the tree and said, “Look! I been catchin’ snakes all day.”  I glanced behind me at the tree, and indeed there were snakes nailed in a level circle around the circumference of the tree. The sight made me blanch not because the sight of blood or snakes grossed me out, but the thought of such wasteful, wanton killing.

I turned to him and said, “What’s up with that?”

He was undaunted by my question. Then he walked over and gave one of the nails in the head of one of the snakes a tap. That felt like my signal to get out of there.

At that moment I took off running toward the college campus. I was in supreme fitness after having won the steeplechase event in the conference meet, so I ran at sub-5:00 mile pace the entire way back to school.

I ran straight down to the track where my teammates were hanging out after track practice. Admittedly I was a bit out of breath, but tried to quickly describe what I’d just seen.

There was laughter among them, and a bunch of “Oh, surrrrre, Cud” comments. So I challenged them. “Come with me,” I told them.

Back to the future

So we all ran the mile-and-a-half back to the spot where I’d seen the guy in the bloodied white cowboy outfit twenty minutes before. To my surprise, the snakes he’d nailed to the tree were now gone. All that remained were the bloody spots around the trunk where the cowbory had nailed them to the tree.

I pointed to the trunk and showed my buddies where the snakes had been. I could sense that none of them really believed me. It all felt like a prank to them. Perhaps I’d seen the blood on the tree from something else and just made up the whole story about the blood-stained cowboy?

I can swear to you that it’s true. And yet never did I see the guy again. He remains something  of a frightening visage in my mind, a concoction of circumstance or perhaps imagination? But I’m not prone to episodes of that sort. And I did reach out and touch one of those snakes that day, a beautiful creature with bold russet coloring in patterns down its back. It’s body was cold and dead.

That entire ring of snakes were victims of the manic cowboy in his blood-stained white outfit. I’m only glad that he didn’t turn that hammer or knife on me that day, or I might have been the one hanging on the tree along with a ring of snakes. And wouldn’t that have made an interesting story?

Christopher Cudworth is a content producer, writer and blogger with more than 25 years’ experience in B2B and B2C marketing, journalism, public relations and social media. Connect with Christopher on Twitter: @genesisfix07 and blogs at werunandride.com, therightkindofpride.com and genesisfix.wordpress.com Online portfolio: http://www.behance.net/christophercudworth
View all posts by Christopher Cudworth →
This entry was posted in PEAK EXPERIENCES, running, training, we run and ride, We Run and Ride Every Day and tagged blood-stained clothing, cowboy dressed in white, halloween, scary stories, snakes. Bookmark the permalink.

5 Responses to What’s scarier than Halloween?