Cryptically speaking, we’re all scarecrows of some sort

Posted on October 9, 2017 by Christopher Cudworth

Yesterday morning I fully intended to go to church. I had the check for the offering in my shirt pocket and had worn my favorite pale gray stretch jeans. But the journey north to church included a stop to photograph sparrows at a park in Geneva called Prairie Green. The abundance of birds got in the way of my travels to church. 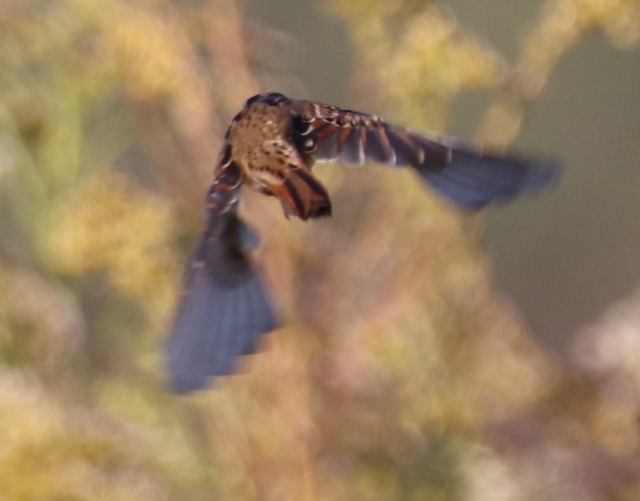 This is peak bird migration season. And while sparrows may bore you in concept, in reality they are quite beautiful to see when you know how and where to look. There are fifteen or twenty species that come through our area. Some have plumage that is quite striking. Others are rich in russets, browns and streaks.

That also means they can be hard to see against dense brush. That’s the point. There’s this thing called cryptic coloration in nature, better known as camouflage, that birds and many other creatures have evolved over millions of years.

Plumage, fur and scales have diversified into all sorts of patterns and “kinds” of living things. These adapted traits contribute to their individual and collective survival. Evolution is a remarkably ingenious thing because it functionally prepares creatures to occupy niches not at will, but by design.

That is not to say that creation is the product of what religious folks like to call ‘intelligent design.’ The whole thing works just fine without any help from above.

I even say this as a person of faith. I view the Creator as the manifestation of love and wholly real to the spiritual side of human consciousness. I’ve seen evidence enough of that in this world to truly believe. But I don’t think we have to break apart the laws of nature and material reality like they were so many theological croutons to try to prove that God exists as some kind of control freak author of all creation.

Personally, I don’t think God cares all that much if we grant the Almighty that status. God certainly doesn’t care who wins a football game or even a footrace. When people point to the sky and say “Give God the Glory,” I want to ask, “Why would he favor you over all others?” It’s false humility. Case closed.

What God does care about deeply is how well you treat your fellow human beings. And that means win or lose. Wise people know this. That’s why Pope Francis recently said, “All scripture that does not lead to the love of Christ is obsolete.”  In case you don’t discern the cryptic meaning there, he’s speaking directly to the legalists and literalists among us who are such theological tight-asses they behave just like the religious authorities of Jesus’ day. And he called them hypocrites and a ‘brood of vipers’ for their manipulative law mongering and public praying.

And what about all those ‘go along to gain power’ evangelicals who voted for Trump? In the words of Colonel Slade in Scent of a Woman, “Fuck you too!”

They’re the same bunch who can’t conceive that evolution is capable of all this creativity. They also ignore the fact that Jesus taught using highly metaphorical parables based on organic sources drawn directly from nature. Get. A Fucking. Clue. In other words.

But yesterday I didn’t go to church because after birding, I spun around back home and got dressed for cycling. The wind was not strong and the day was so bright it absolutely demanded that I take the Venge for a spin. So I rode my favorite route of late and wound up circling past the cryptic little farm near my house where there are real flocks of guinea hens roaming around, fat hogs with bellies that touch the ground and even a chrome buffalo sculpture made from car bumpers.

I paused to take a photo in front of a farm gate which is decorated with funny signs. The humor was hilariously dumb, but I thought, “Look at this, I fit right in!” It was like cryptic camouflage for this guy, the main perpetrator of Stupid Dad Jokes and Bad Puns.

Which meant I was very happy to pose by the signs that hid me from the real world for a few moments. It was shady, I felt good on the ride and I felt like I was in the company of kindred liberal spirits. God has a bad sense of humor, why shouldn’t I follow the lead?

Later that afternoon, I was planning to join my daughter and her boyfriend for a trip to a different farm named Kuipers, an apple orchard west of my old high school that sits on a glacial rise in the open fields of Kane County.

I ride by that farm many times over the cycling season. It goes from a cold spring property where the apple trees are bare and spare and a few bad apples, like sinners still hung from the cross, cling to the hard black branches of winter.

Then comes April when hopeful blossoms greet early pollinators, and bees for the most part venture out to gather nectar on warmer days.

Come June the leaves come in full and shroud the tiny apples budding from the blossom points. Then come the hot days of July and August when those fruits turn gold and red and yellow. There is no single tree that sits at the center of the orchard by then. They are all tempting. 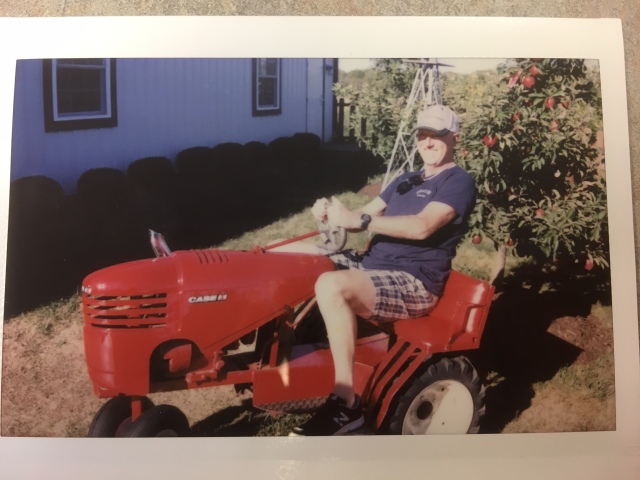 Riding past all this transition during the year marks the passage of summer days and pending fall.  Indeed, it even calls up memories of early childhood, which seem like past lives to me these days. I am a reincarnation of my younger self in so many ways. So this Polaroid taken yesterday by my daughter feels like it was snapped in 1962, but is so very 2017 at the same time.

It has been hot in Illinois these past few weeks, so nothing resembling a true October chill has come close to us. And no first frost. So I keep riding past the hill where the apple orchard crouches, and it still looks like summer. But now there are thousands of cars coming and going on weekends and pumpkins litter the grounds.

The cars headed to Kuipers roared past me on my way up a country road toward Kaneville. So when I stopped at the intersection in town I asked through an opened window, “Where is everybody going?”

The woman inside the car told me, “Well, we’re going to Kuipers.”

There was no hidden meaning in that.  Not on the surface, anyway. People were driving country roads to Kuiper’s because they were responding to some set of autumnal instincts that even they could probably not explain. Purchasing pumpkins, honey and apples, mostly. It’s what we humans do in October.

That is not all that different from the sparrows I watched in the fields feeding on weed seeds and crickets. That’s what birds do in October on their south. 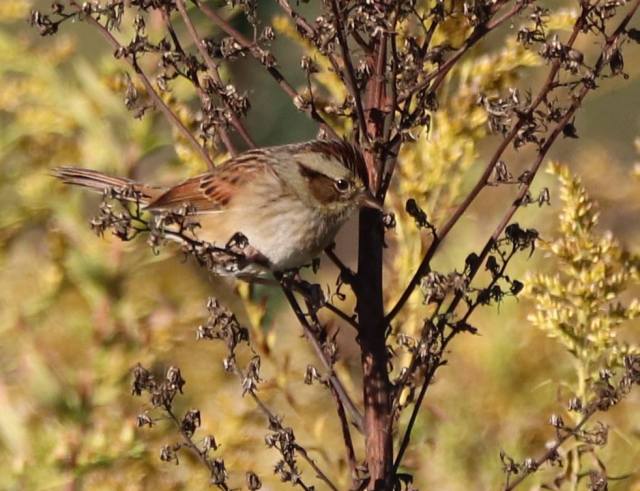 But you know me, I always look for the deeper meaning in everything. So I looked up the word ‘cryptic’ just now, and here is how it is defined:

cryp·tic ˈkriptik/
adjective 1. having a meaning that is mysterious or obscure.

And as I walked through the Kuiper’s store and grounds, I began to think about the long tradition our family has in going there. Then I thought back to the other farms where I’d lived or grown up in my youth. I know what it means to try to get close to the land in some way…anyway possible.
Then I looked at all those people wandering the Kuiper’s farm, and realized the secret meaning of their presence. We are all searching for that present place where actual earthly connections can be found.
Yet we are all too often divided from this early realm by our own food chain, or divested by nature of our transportation, determined as persons by our wage earning power or outright discriminated against by our face, our race, our gender or our orientations.
For there are people who know too well how to exploit those traits, and will do everything possible to keep people from breaking through their cryptic existence to grasp reality. 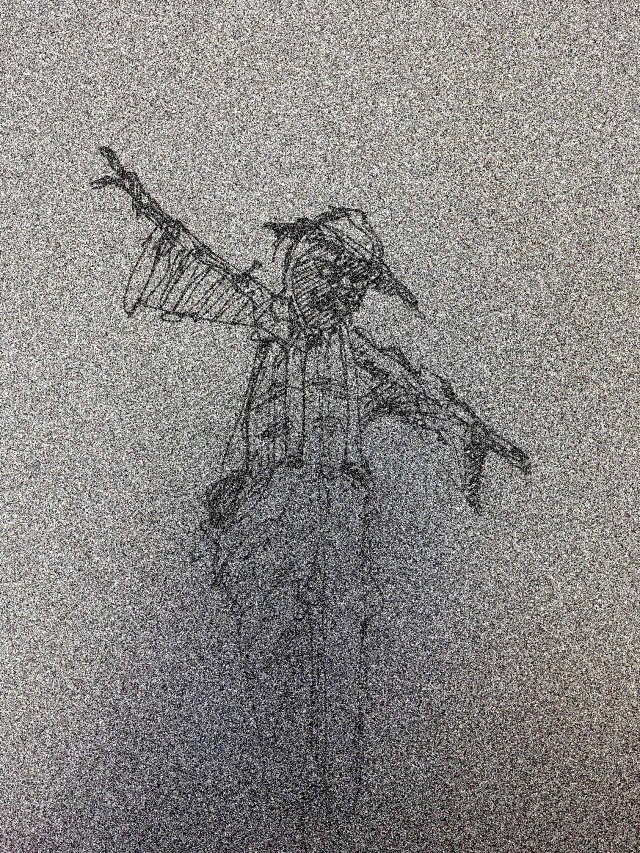 And should farmers think they are all separate or above the seeming confused eating habits of the civilized world, the hard truth remains that they are just as tied to the markets sucking grain out of their fields as the rest of us. And somehow they have been convinced over the years to often vote against their best interests by people who know how to mix a literal God with a mindless free market to create a Scarecrow America that they’re all supposed to worship.
It made me realize that we are all living some sort of cryptic life. Each set of our beliefs and the imaginations that drive us are effectively camouflage for the realities we all face in this world. Which helps explain why a lonesome scarecrow gives us the creeps. They are cryptic reminders of our own frail imaginations and the mortality from which they protect us.
And if you ever hear me calling out
And if you’ve been by paupers crowned
Between the worlds of men and
Make-believe
I can be found.
Lyrics from Scarecrow’s Dream by Dan Fogelberg