Posted on August 8, 2017 by Christopher Cudworth 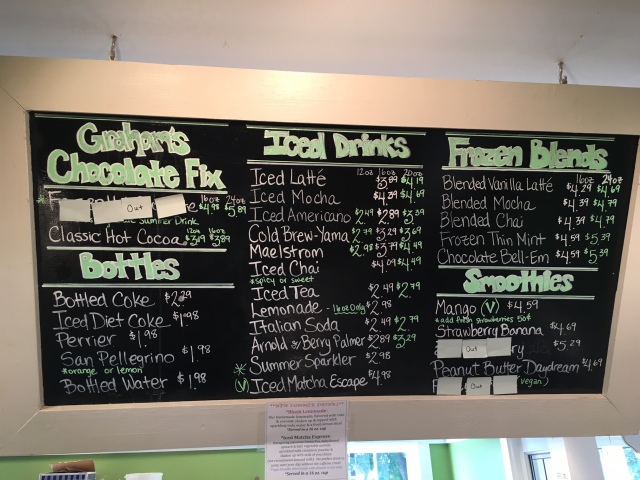 On mornings when I drop my wife at the train for her commute, I circle around to Graham’s 318, a coffee shop on quaint little Third Street in Geneva, Illinois. But given the fact that I don’t like coffee, that is never on the menu. But chai tea is good in winter when it’s cold outside. And iced chai is nice in summer when it’s hot outside.

I also love their Frozen Hot chocolate. Basically, the drink consists of 1) chocolate 2) ice. It is devilishly good. There is something in the chocolate that truly stimulates my brain. Perhaps this is due to the naturally occurring caffeine in chocolate, but FHC feels different than drinking a Coke or other such sugary soda. Frozen Hot Chocolate produces a feeling of euphoria in my brain of the exceptionally creative kind. Thoughts clear up and my writing spreads out before me like an outline. It is the opposite of my Kryptonite. I feel like Superman when I drink it.

There’s just one problem: that stuff is so rich in calories it does not pay to drink one every day. Plus, I don’t want to lose the special aspect of its effects. You can argue one way or the other, but we all need a drug of some kind to make us happy now and then. Running is that drug on many days of the week. Lacking that, Frozen Hot Chocolate does just fine.

As you have surmised by now, I do not believe it pays to get into a rut with anymuch of anything. Sure, some routine is nice in life. But it can ultimately kill the will as well. Which is why, a couple weeks ago, I took a look down the menu at Graham’s and noticed something interesting at the bottom of the menu. It’s called Iced Matcha Escape. So I asked about the young gal behind the counter about it, and she lit up. “Do you want one? They’re great!”

So I did something different. I ordered the Iced Matcha Escape. And it was good.

The drink is a little more expensive that my norm. 12 ounces costs $5.00. Okay, that’s probably absurd. But when I sit in Graham’s enjoying the atmosphere and chatting with the regulars, there’s a value I’m purchasing there as well. The same goes for Starbucks, but in a different way. In both cases it is the Wi-Fi that I also appreciate. If it’s fast and reliable, I figure the couple bucks extra that I pay is compensated by the access to Wi-Fi so I can write freely and without interruption.

So the day-to-day choices we make are dependent in part on reliability but also in variability. That’s why it pays to have some running and cycling routes you trust. But on days when the schedule isn’t so demanding, it truly helps to go run somewhere different. Last night after dropping our family dog back at my daughter’s house after his weekend visit with us and the cats, I stopped on the way home to run at a beautiful forest preserve called Herrick Lake. There are limestone trails that wind through woods and restored prairie, past wetlands and around the lake when you get back. Sue and I trained there regularly for several years with our former triathlon club, but it got a little old going there every week. Yet the return trip was a pleasure.

The same goes for cycling. Last year when I got my Specialized Venge I purposely avoided strapping a cyclometer on the bike. There were too many rides on my Felt where I did little but stare down at the cadence and MPH numbers.

Now (sans cyclometer) I ride just as hard as I once did, only I do it by feel. This has been liberating and fulfilling. It turns out that staring at the number on the bike computer does not actually make you ride faster. It only reminds you that you’re going a certain MPH. The legs and brain still have to do the work.

The liberating effect of riding without a cyclometer has been the reward of drifting off on roads that I would not take if I was worried about MPH average or a Strava result. This has delivered a new will to do something different on the bike far more often.

As for swimming, everything about that sport is still relatively new to me. The recent sprint triathlon race was a blast and I had no problem swimming 800 meters with my wetsuit on. It gave me the courage to swim a mile at some point, possibly as early as two weeks from now.

Do something different. It can change your life now and then, and in the future.

Christopher Cudworth is a content producer, writer and blogger with more than 25 years’ experience in B2B and B2C marketing, journalism, public relations and social media. Connect with Christopher on Twitter: @genesisfix07 and blogs at werunandride.com, therightkindofpride.com and genesisfix.wordpress.com Online portfolio: http://www.behance.net/christophercudworth
View all posts by Christopher Cudworth →
This entry was posted in cycling, riding, running, triathlete, triathlon, triathlons and tagged Graham's 318, matcha escape. Bookmark the permalink.