Posted on December 19, 2016 by Christopher Cudworth

While riding home from church on Sunday morning, Sue and I had a laugh at the lyrics of that holiday tune, “Baby, It’s Cold Outside.” You know the tale, don’t you? It’s one of the most ‘date-rapey’ songs ever written.

This evening has been (been hoping that you’d drop in)
So very nice (I‘ll hold your hands, they’re just like ice)

My mother will start to worry (beautiful what’s your hurry?)
My father will be pacing the floor (listen to the fireplace roar)

Well, it just goes to show, even Christmas can be all about getting laid. Just ask the Holy Spirit and the Virgin Mary. Of course, there’s an old joke about this grade of interplay that is not very politically correct

Q: Do you know the difference between rape and rapture?  A: Salesmanship.

And yet, we glide through the holiday season with such songs playing through our heads with nary a question about their  subversive nature. The same goes for that creepy song I Saw Mommy Kissing Santa Claus. That kid was traumatized, don’t you think?

My new favorite holiday song is by none other than Dan Hicks, formerly with the Hot Licks, who never met an insightful ditty he couldn’t write. Here are some lyrics for his Christmas song called Santa Lost a Ho.

Now, Santa’s been doin’ his best
To get into the Christmas mood.
Keepin’ his little elves happy,
He’s the number one Christmas dude.

But there ain’t no joy,
‘Cause just one toy
Is missin’ from Santa’s shack.
He never had a doll go AWOL
Once he got her in the sack. 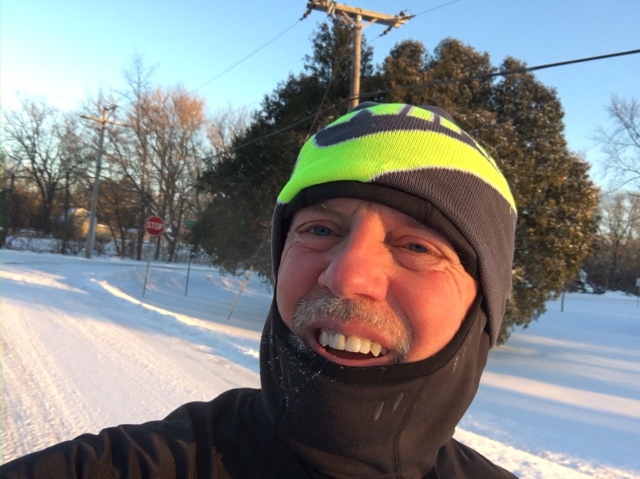 All these songs were playing through my head as Sunday morning arrived with temperatures at four below zero and a wind chill of minus fourteen degrees. We all need something to sing when we get out the door in those temperatures. A Christmas tune earworm can help get you through those first five minutes when a risk of frostbite first hits your skin at the cheekbones.

So I hummed along with Dan Hicks while my feet crunched on some newly fall snow. The sun was just coming up and there were golden sheaths of light across the otherwise blue landscape. I was grateful that I didn’t have to pee, because taking my hands (or anything else) out in that kind of cold would have been miserable.

The snowplows had largely done their work clearing the roads. Yet the road shoulders were indistinct. So I crept to the farthest edge of the plow zone whenever vehicles came toward me. Some were gracious and moved toward the road center as they passed. Others, most notably a snow-white Mercedes sedan with a grumpy looking troll behind the wheel, budged not an inch. His vehicle passed so close to me that I waved my hands in protest as he rolled on by. Asshole. There was no need to come that close to a runner on a quiet road on a Sunday morning. But he was not budging an inch on his precious section of road. A cold-hearted bastard, he was.

Perhaps he was simply a Bah Humbug type… hauling the spiritual chains of his business dealings around with him through life. Even Ebenezer Scrooge in his most selfish moments has nothing on a stubborn driver on a Sunday morning in December.

Yet I found another Christmas tune to sing as I turned onto Deerpath Road where the snow was an inch thick and still white. Running on such surfaces is a fun bit of winter that only the early risers get to share. Once the traffic picks up the snow turns brown and slushy, and the roads get awful in terms of traction. But if you get out on a super-cold morning the snowy roads can look lovely in dawn’s light. And so it went. I traipsed along with my legs feeling warmed up and the rest of me wasn’t so terrible bad either. 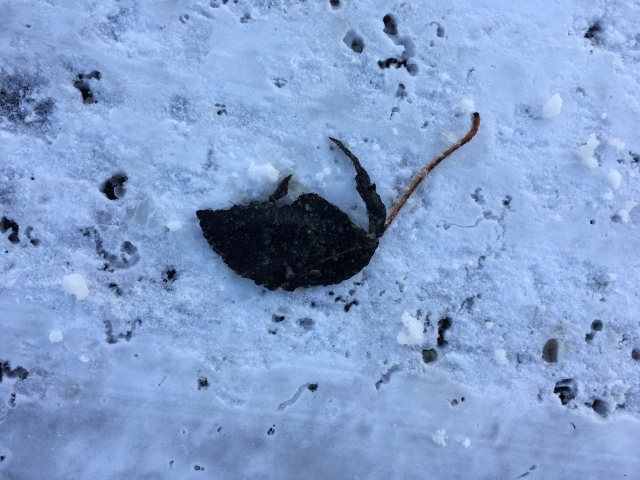 Then I glanced down at what I thought was a dead mouse. Only it turned out to be a leaf that had the same shape. So many winters I have come across such dead things and wondered about their last moments. That’s the real reason for the season. The universe is a cold, largely lifeless place. It is ours to calculate our minorly warm presence in the face of such extravagant desolation and dark matter.

In the last 400 meters toward home, I cut through a field with snow drifts that were sculpted by the wind. These were artfully arranged, and I tried to avoid the prettier parts to allow the universe to have its way with the look and feel of the place. Yet as I arrived in my own backyard, the temptation to run through the drifts was too great and I shot a slow motion video that you can find on my Instagram account genesisfix. You can also follow me on Twitter : @gofast.

It was a fun little three-mile run about which Sue had some concerns. “Be careful out there,” she warned as I dressed up with two hats, two layers of sweat bottoms and sundry other items to keep warm. But I’ve been doing this for a long time. I don’t take the weather for granted, yet don’t let it scare me too much either. Because according to that song, Rudolph never let the weather conditions scare him either.

If you stop and think about it, the scarier prospects of some situations await you indoors, where the people are. Just listen to the song Baby, It’s Cold Outside, and you’ll realize that’s true.

Christopher Cudworth is a content producer, writer and blogger with more than 25 years’ experience in B2B and B2C marketing, journalism, public relations and social media. Connect with Christopher on Twitter: @genesisfix07 and blogs at werunandride.com, therightkindofpride.com and genesisfix.wordpress.com Online portfolio: http://www.behance.net/christophercudworth
View all posts by Christopher Cudworth →
This entry was posted in Uncategorized and tagged baby it's cold outside, holiday songs, running outside on cold days, santa lost a ho. Bookmark the permalink.