And it was good.

Posted on December 1, 2016 by Christopher Cudworth 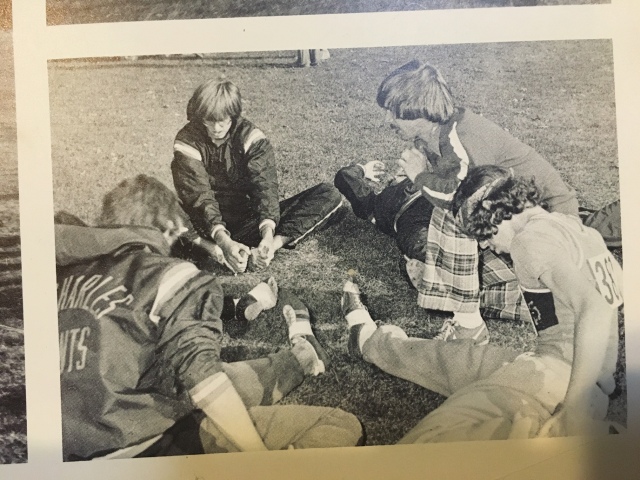 Coach Trent Richards, shown here counseling his runners before a district cross country meet in 1974, passed away on November 30, 2016.

At the age of 12, having moved with my family from Lancaster, Pennsylvania to the small town of Elburn, Illinois, the world felt like it was upside down, or inside out. Even the soil in Illinois looked different from the ground back east. The earth was dark instead of clay red. It was hard to understand why that was the case. The place did not initially set well in my head.

So I clung to things familiar, and one of them was baseball. That was a game that did not seem to change from place to place. And I loved it. I was a pitcher, and a strong one at that. But at 12 years old I was far too advanced as a player to remain in the league for 8-12 year-olds in the little town of Elburn, where I threw a perfect game the first time out. Not a kid on the other team even touched the ball with a bat.

That made me an anomaly. For some inexplicable reason, there was no team for kids between 13-16 years old. So the town’s baseball coaches made me an offer. “Do you want to try out for the American Legion team?”

I had no fear of older kids, per se. My brothers were older and threw me batting practice that was hard to hit. And I’d pitched against them too. So I tried out for the Legion team and wound up pitching several games before the season was over.

By the next summer, as happens in small towns, a new coach had taken over the team. He was a fiery young man of perhaps 22 years old. His name was Trent Richards. And as my friends would characterize him later in life, he was a force of nature.

Trent coached our baseball team the next few summers. We had a rollicking good year when I was fifteen, traveling from town to town on summer afternoons to play ball in small towns like Huntley, Sugar Grove, Hampshire, and Cary. We’d pile into a group of cars and drive through the Illinois countryside with the windows down, eager to go swing the bat and try to win. And we did that a lot. And it was good.

That was life in the summers of the early 1970s.

But the high school I attended did not have a baseball program. The athletic director Bruce Peterson was also the track coach. At a school of 750 kids, he did not want to dilute the pool of prospects for his precious track team, so baseball was not on the sports agenda. That  meant we all went out for track. And that track program was really, really good.

There was also no soccer team in the fall. That was the sport that my brothers both played back east. And had our family stayed back in Lancaster, I’d likely never have become a full-time runner. But without a soccer program, my father shoved me into cross country because he did not like the sport of football, which he considered a death-knell for knees.

He was likely right in my case, for I weighed all of 128 pounds. Plus that first day of cross country sunk into my veins like a drug. Plain and simple: I loved running. It changed my brain chemistry for the better. As a freshman, I helped lead our team to a sophomore conference championship. Then as a sophomore, I helped lead our team to its first-ever varsity cross country championship.

Then my father moved our family again. The reasons for the move were always vague, but I believe it had to do with money, since we downsized houses and rented, for one thing. 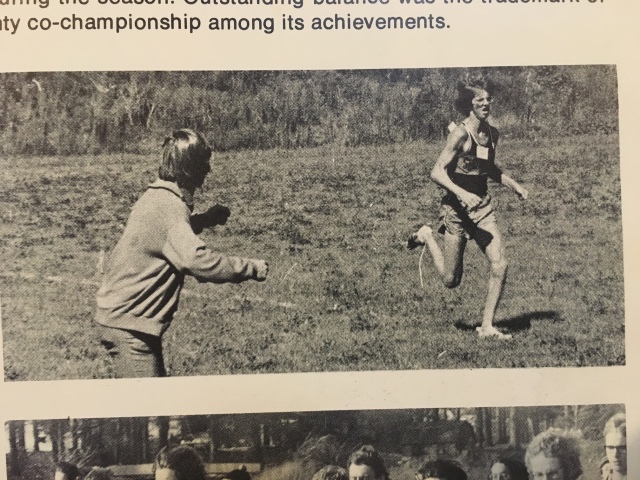 Coach Trent Richards urging me on to an invitational victory. Photo by Kurt Mutchler, who went on to become a National Geographic staff photographer.

Yet that move brought me back under the tutelage of my former baseball coach Trent Richards, who coached both track and cross country at St. Charles High School, twelve miles to the east of Kaneland, the little school out in the cornfields.

There was a mild hint of scandal to my move, and small rumors that Trent had recruited me to run for the school where he coached. Nothing like that occurred. He never talked to me or my father. Yet the team that I joined that fall for cross country was primed for success in St. Charles. Under Trent’s coaching leadership, we went 9-1 in dual meets and won a district championship.

Trent Richards was an avant-garde coach in many ways. His summer track club was far ahead of its time in encouraging women to participate in competitive running. The summer club attracted kids from all over the Kane County region, so that athletes from different schools got to compete on the same team and benefitted from open rather than scholastic competition. It was an egalitarian environment.

Then I ran yet another season for Trent with some individual success, but Trent characterized my running ability correctly the prior season when a sportswriter called me a “junior sensation.” Richards corrected him in print: “Cudworth’s a good runner, but not a sensational one,” he said.

And that was deadly accurate. One thing you could always count on Trent Richards to be was honest. He did not mince words with anyone. He was also a bit of a provocateur, a trait that ultimately served him well in business, where his big ideas (and he brimmed with them) at times turned into real successes. The website funbrain.com on which he labored for years was just one of his many projects and concepts that came to fruition. He had turned his teaching degree into a tool for engaging the world.

It was this trait to push the envelope that both attracted and at times repelled his closest friends and associates. If he had an idea he wanted to try, he could be persistent beyond belief in communicating its potential. And in his coaching days, he was not afraid to scorch an athlete who was not trying hard enough, or is someone was not reaching their potential in his estimation.

Yet he also could be so kind and introspective that it made you sad to have disappointed him in some way. This balance made him a great coach and friend. As he aged, he turned his coaching skills to individual athletes whose lives he tried to better not only in sports, but in other areas as well. 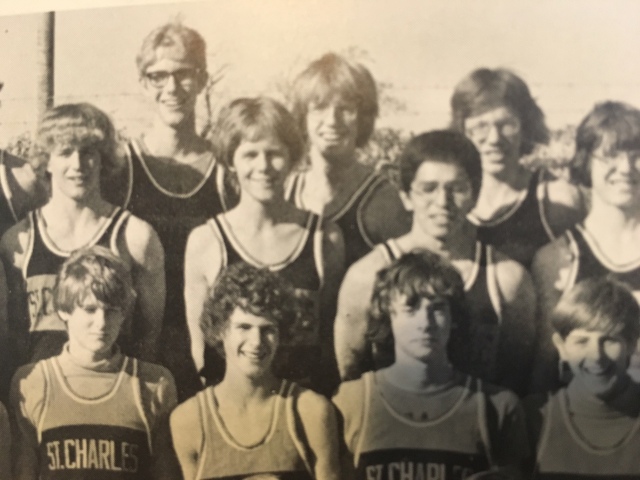 The man always tried to spare you unnecessary trouble if he saw it headed your way. During the first week of basketball practice my senior year in high school, he wandered through the gym to find me off in the corner doing drills with a fellow senior teammate. Neither of us had attended summer basketball camp, and Trent knew that spelled doom for our prospects of making the team, much less playing during the season. “You’re not going to play this year, you know that, right?” he advised us both. The reality sank in at that moment and we both left practice.

That’s how it is in life, if you think about it. At least half our dreams or casual perceptions turn out fruitless, or even damaging if someone does not intervene. It is the mark of a true friend and mentor to at least point out the options, perhaps make the situation clear.

This doesn’t mean that everyone is accepting of such advice. Or that there were not times in life when my coach and mentor could not have used some of his own advice. That’s the nature of all our existence. I believe that role became mine to play in his life as our paths continued to cross and his sensibilities continued to broaden. Trent was always interested in seeing and understanding as much of the world as he can. Once while sitting on the deck of a friend’s cabin out in Dixon, Illinois, surrounded by leafy trees and bird song, he turned to me and said, “You know a lot about nature, don’t you?”

“Maybe not a lot,” I offered. “But some.” Then I directed his attention to the calls of a Great Crested Flycatcher chirping and making its “Whrrriiiuuup!” noise in the trees above our heads. There were many other birds as well. We sipped our beers and soaked it all in, not in a hurry for once, or competing at anything. We shared those moments and many others in life. And it was good.

Trent Richards passed away on November 30, 2016 after two years of cancer treatment. Our association dates back to 1970.

Christopher Cudworth is a content producer, writer and blogger with more than 25 years’ experience in B2B and B2C marketing, journalism, public relations and social media. Connect with Christopher on Twitter: @genesisfix07 and blogs at werunandride.com, therightkindofpride.com and genesisfix.wordpress.com Online portfolio: http://www.behance.net/christophercudworth
View all posts by Christopher Cudworth →
This entry was posted in competition, cross country, running, track and field, Uncategorized. Bookmark the permalink.

7 Responses to And it was good.