Posted on September 8, 2016 by Christopher Cudworth

Last summer at this time, my significant other was in the final stages of taper for the Ironman in Madison, Wisconsin. She had trained through heat and rain and cold going all the way back through spring. I did a fair amount of that training with her. We did a Century (my first) in June. Rode the Horribly Hilly course too, a relative monster of a ride with a 2000 foot climb at the finish and 18% grades along the way.

Yet for all that training, I only did half of what she did. My job on Ironman weekend was to act as Sherpa for Sue and her sister Julie. They both finished. That was the goal.

Several friends are doing the race this weekend. It seems like yesterday (but it was early this summer) that we first rode the hills with a smart young woman named Emily who is doing her first full Ironman. We did a loop on the course west of Madison. She was frankly shocked at the inclines on the set of hills called the Three Bitches. But her response was one of respect and acceptance that the challenge was hard. There was no falseness in her honesty. No bluster or braggadocio such as, “I’m going to kill this.” It was more like, “I’m not going to let this kill me.”

Which is probably not a popular meme on Ironman chat sites. The more popular mode is to cheerlead and encourage people with statements such as, “You got this.”

And generally, that proves true for most people. But along with that investment in time and preparation is the realization that things can go wrong, and often do. An ugly reality like a flat on the bike can steal minutes from your time. While riding with Emily on the course early this summer, we encountered a woman by the side of the road with a flat rear tire. She confessed, publicly, that she had never learned to change a flat.That’s not good preparation for anything having to do with a bike, much less an Ironman.

In an Ironman, most triathletes are so glad to get off the bike after 112 miles of riding, that they veritably smile at the chance to do something other than perch on a bike seat. Any way that you look at it, 112 miles on a bike is a long, long way to ride.

The running part? Most people get through it. That’s the goal. Because 26 miles is also a long, long way to run. What, no one told you that? These are things we all learn the hard way.

The full Ironman distance is simply no trifle. Some of us recognize that without engaging in the Grand Experiment. Personally, I feel no compunction to do the dastardly deed of the full distance. I’m quite happy to be working toward an Olympic. And while I did not quite get the swimming up to snuff this year to take that on, I’m in the pool and making exciting progress going into the winter. By next spring I expect to transform from a dragonfly nymph into a winged dragonfly. But I still won’t do the butterfly stroke. That might have to wait a bit.

Someone last year swam the Madison Open Water Swim (MOWS) the entire way doing butterfly. People admitted grudging admiration. It seems some folks naturally like to make things harder for themselves than the rest of us. We also witnessed a guy riding the Horribly Hilly ride on a single-speed (fixie) bike. He suffered on the hills, to say the least. But he made it.

All the relative risks that go into Ironman training and the careful preparation for the race makes some people a little paranoid toward the end. The joke is that Ironman athletes want to case themselves in bubble wrap to avoid injury in the last days before the race.

Unfortunately, the best-laid plans still go awry. Last year during Ironman training one of our friends was involved in a bike crash with an aggressive driver who cut off an entire pack of cyclists. The accident caused him nauseating headaches from a concussion. It has taken months to recover. Suffice to say that was an unexpected hurdle along the way, and one that he continues to have to jump.

Last August, my fiance Sue got cut off by a driver who turned into her lane on a country road and just stopped her SUV right in the path of a group of riders . Sue had to dump her bike to avoid striking the Escalade. That incident ruined her bike frame, and she had to scramble to find a new bike before the race. It was far from ideal.

That’s why I titled this blog “It’s Ironman weekend I’m afraid.” Because fear is a natural part of human response, experience and existence. Yet it is the process of overcoming or moving past our fears that makes life a richer experience. Sometimes that ability comes through a boatload of sacrifice, and not by choice. At other times it means choosing to swim through open water with a thousand other competitors. All to earn the chance to ride 112 miles and run 26.2 after the 2.4 mile swim. Hello.

The important thing to remember here is that fear on principle should never be used as a marketing tool. There are people who market the idea that you always should be afraid of something. It seeps into our mindsets and creates public anxiety on a scale that drives domestic and international policy. The people who do this to society are the real enemy. It shocks me that people so willing to confront their fears in some aspects of life so unwittingly subject themselves to a fear-driven worldview that says you have to guard yourself with a gun in public places and worry about terrorists around every corner. It’s insane. And it’s driven by fear.

It’s the people willing to help you overcome fears that are the ones you should trust.  They are the key to your well-conceived hopes or your ultimate future. A good leader or coach actually seeks to anticipate the potential impacts of fear to provide you with a good mental foundation going into any situation. Sports psychologists encourage mental rehearsal to help athletes overcome anxiety and fear about training and competition. Some people have fear of failure. Others have fear of success.

Of course, no one likes to admit they might be afraid. We’re somehow taught that being afraid shows a lack of courage. Instead, courage is the simply the antidote to fear. But it is not iAnd the best way to deny that fear is to take it on firsthand.

Yet we have this image of courage being this irrational ability to ignore danger and to take risks that no other human being would dare. Yet soldiers are taught how to keep calm, not rush about madly in the thick of war. It does not mean they won’t piss themselves in the heat of battle. The trick is to deal with fear, assemble your thoughts and carry on with your duties.

At the peak of my racing career there were many occasions where I stood a good chance to come in first place. Many years later I’ve come to appreciate what a unique perspective that really provided. Because even when your primary concern is fear of losing, there is still fear to contend with. 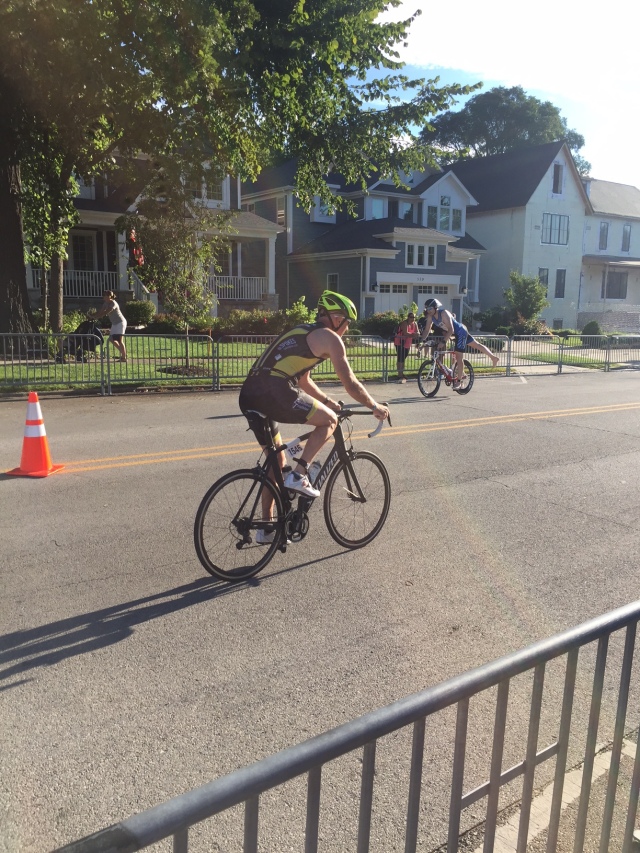 Now that I’m a hard-working senior athlete who still finishes in the top 25% of most races, my fears revolve around the fact that triathlon is still a relatively new sport to me. Getting over fears associated with open water swimming has taken place in increments. And with experience, confidence has grown.

I also “fear” spending too much time in transition, or riding so hard on the bike that the run segment suffers. These types of fears are management issues. Practiced. Rehearsed. Made better through trial and error.

Which brings us again to the Ironman distance, and all those athletes about to embark on Indian Summer journeys through water, hills and darkness up in Madison and other cities around the country. Surely a few are afraid of not doing as well as they’d like, or not finishing. But as one great President once said, “The only thing to fear is fear itself.”

When you’ve done the work (or not…and have to deal with it) to prepare the best way you can, and sought to eliminate potential for mistakes, the starting line is simply a place to begin testing yourself. Take courage from the fact that you’re there. The rest comes together once you’re moving, and the mind goes to work replacing fears with the familiar sensations of swimming, riding and running.

Good luck to all this weekend in Madison, and many more.