Posted on July 26, 2016 by Christopher Cudworth

Today is my birthday. But I’ll admit: July is a wonderful time to get a year older. The garden is in full bloom. The sun is shining. The birds are coming south…

What, you might say? Birds don’t migrate in July, do they? And I am here to tell you, they most certainly do. Shorebirds specifically. Birds in this category typically finish their breeding business in June in the far north of the continent. Then they’re free to wander south at their leisure, feeding in fluddles and marshes along the way. Many of them change plumage as they go, shifting from speckled breeding plumage to plain patterns of gray-brown and white.

Yet they are still an interesting sight to see, and a marker of mid-summer. I’ll be out cycling in July and see a flooded field with a band of shorebirds in various sizes and remember that the seasons are indeed passing whether we like to admit it or not. July can seem like such a refuge from reality with its heat, thunderstorms and lazy birds largely finished with breeding. But the new year’s crop The set of three young Cooper’s hawks that fledged from the nest in the top of a tree next door are whistling and chasing their parents around the big trees begging for food. They’ll be left on their own soon to hunt. It’s nature’s way.

But the new year’s crop has to learn its way. The set of three young Cooper’s hawks that fledged from the nest in the top of a tree next door are whistling and chasing their parents around the big trees begging for food. They’ll be left on their own soon to hunt. It’s nature’s way.

All these days. All these rhythms. Yet an entire fridge full of beer sits waiting for someone to consume it. I was on the wagon for weeks. No drinking when taking antibiotics. That’s the rule. Finally, the medicine worked for the case of C-Diff that I developed from having taken antibiotics for cellulitis. I don’t know how I got that, but you typically don’t get to choose your afflictions in this world. So you either cure them or learn to live with them. I did not want to have to learn to live with an afflication like C-Diff.

Despite those obstacles, it’s been a good summer so far for racing. I’ve got a few successful triathlons under my belt this summer and a planned Sprint Triathlon coming up in April in Naperville. If the spirit moves me there may be an Olympic to do in August, but I’m also using a weekend to get my Road Runners Club of America Coaching Certificate. That might mean a September Olympic. But we’ll see.

In August, there is also the Madison Open Water Swim to do. Sue signed me up and that means there’s a mile to cover in the water! Whether it is wetsuit legal or not should be interesting. 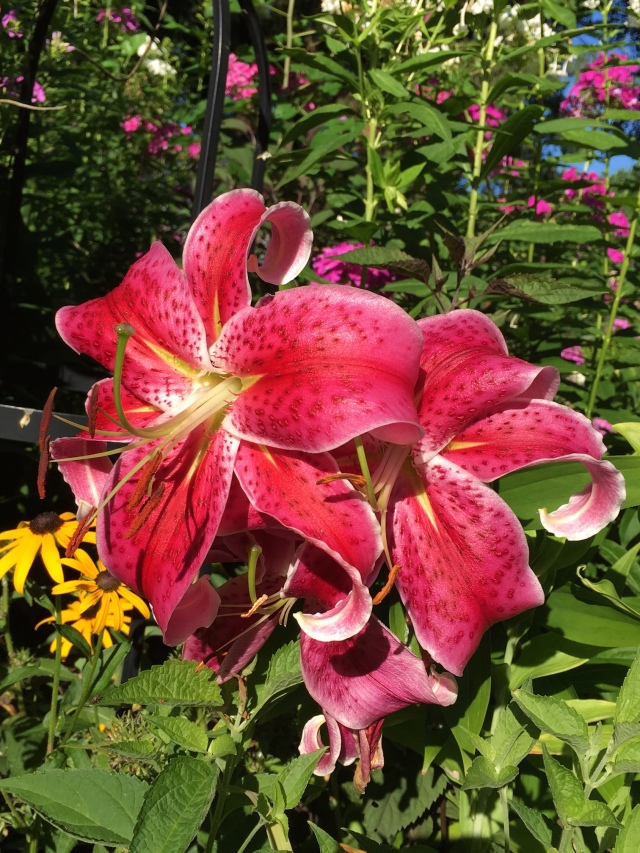 All these challenges and some nasty little afflictions can make you a philosophical about life. Compound that with a birthday and a few changes possible on the home front with my pending marriage to Sue and July is a month for contemplation indeed.

We all know that life doesn’t always go exactly as we plan it. But that can mean good as well as bad things happening. And yesterday while doing yardwork, I was shocked to discover that the hanging plant I’d given up for lost…was now sporting bright new red blooms. It was such a joy it took my breath away. That basket plant hangs above a blizzard of phlox and the last blooming lilies, which are so rich and unreal they defy all convention. And right now conventions are a good thing to defy.

The color of those plants is so rich one can stand there and almost feel unable to take it in. And don’t we wish that every moment in life was like that? Present. Mindful. Enriched by what we see. And full of good surprises.

Yet nature transforms our daily dreams into days, and days into months, and months into years. Suddenly we’re standing in the garden another year older. Wishing and wondering over what it all means.

To me that is the reason why I run, ride and swim. To awaken the mind to moments and to make the most of them. The purity of the moment is made from the absence of time…that’s the verse I’ve often quoted from the book Ambiguous Adventure. It means that when we’re doing things we enjoy, time expands in our consciousness.

So I’m taking my scope, binoculars and digiscoping setup with me this afternoon on my way to some writing business. On the way out and back, I’ll drop by a few fluddles to take some photographs of shorebirds if I indeed happen to find some.

There are some reports of black-necked stilts south of Sugar Grove, which is right where I’m headed. They are a species of bird that has the longest legs in proportion to their body of any shorebird in North America. For that reason, they seem a fitting bird for a runner to appreciate. Or just a man who likes a fine pair of legs. And that’s me.

Christopher Cudworth is a content producer, writer and blogger with more than 25 years’ experience in B2B and B2C marketing, journalism, public relations and social media. Connect with Christopher on Twitter: @genesisfix07 and blogs at werunandride.com, therightkindofpride.com and genesisfix.wordpress.com Online portfolio: http://www.behance.net/christophercudworth
View all posts by Christopher Cudworth →
This entry was posted in triathlete, triathlon, triathlons, Uncategorized and tagged birthday wishes and dreams. Bookmark the permalink.

3 Responses to Birthday wishes and dreams