Immodium did not quite lead to a podium

Posted on July 10, 2016 by Christopher Cudworth

Days before the Lake Zurich Triathlon, I had not even registered for the race. There was a very good reason. The only races I was doing last week were to the bathroom to make it on time before calamity.

A few lessons have been learned this past two weeks about the importance of gut bacteria, and how it works within our bodies to regulate the kind of poop we pump out. For those of us with relative regular bowel schedules, these kinds of interruptions are a major disruption in how you look at life.

Oh, I know. There’s a whole world of people out there with far worse problems in their heinie functions than a little imbalance in their probiotic ratio. I respect all those dealing with this fine balance within our bodies. There are those who can’t seem to poop for crap, and wear tee shirts that say, “I pooped today!” And then there are those whose digestive systems have gone on permanent or semi-permanent strike.

There are lots of reasons why these things happen. But all you care about when it happens to you is how to fix it. So I went to the doctor (yes I did) and asked what to do. And tomorrow I find out if there’s a C-Diff thing going on.

In the meantime, I had a race to run. So I did the other thing the doctor told me to do and made the trip to Walgreen’s for a bottle of Immodium. I chose the mint because I thought it would taste better. And it tasted better in that way that things that are supposed to taste better but actually taste terrible tend to taste. Which is just shy of awful. 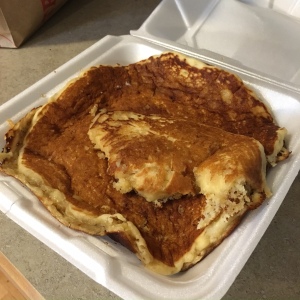 I earned a post-race meal of pancakes and eggs. But the pancakes were so big I could only eat half of the first one. My gut was too full.

I’m not that sensitive about that kind of thing, so I choked down two sets of three teaspoons. That’s what the microscopic instructions said to do. And then I waited. An hour later my gut rumbled in the manner of distant thunder, and I thought something was going to blow. But you can’t run away from your own ass, so I stuck it through, had a couple short sessions on the pot, and that was that. The Immodium was working.

Only I think I overdid it a bit. Because we left at 4:00 in the morning and there was no urge to hit the bathroom before we left. That’s highly uncommon. Even at the race when I had plenty to time to hit the porta-potties, the Immodium would not give up that shit.

Which was rather the relief I was looking for. Because all last week the only thing I wiped more than my ass was philosophical tears from my eyes as the nation suffered yet another round of stupid murders by cops with guns and people with guns aiming at cops and still the trolls on Facebook claim that guns have nothing to do with gun violence.

I hate that shit. And I posted this article to explain the crappy neurosis that is driving this insanity in America. And then I made a vow to let it go a bit. Because frankly I felt awful for three whole days Thursday, Friday and Saturday. Exhausted and slightly feverish. Clearly my body was trying its hardest to work through what amounted to an infection of the bowel.

C-Diff can get serious. And I did not want to race if my body temperature was up. But the nurse took my temp and it was 98.6. “You don’t see that very often, actually,” she told me. And my blood pressure was 107/78. Pulse just under 60.

Yet I was so tired. Whenever I sat down to watch the Tour de France, my eyes slammed shut. Watching the Tour in that state is like a weird dream where Phil Ligget and Paul Sherwin are like characters from Alice in Wonderland. At one point I woke up to find Chris Froome racing downhill at 50+ mph. So I thought I was dreaming and went back to sleep.

However that was the real deal, and Froome built a lead that he isn’t likely to relinquish anywhere before Paris. Hell, he even punched an ignorant fan right in the face during the climb before his massively speedy descent. 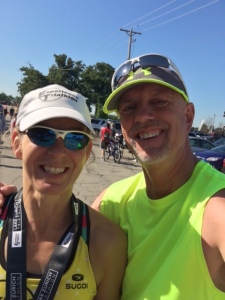 Post race smiles. Sue got second in her age group and I got fifth.

That was a bit inspiring. For the rest of the day I felt better. I took the bike out for a one hour spin and felt good. Even got some sprint practice in the drops in anticipation of the next day’s 15-mile racing speed.

So it was quite a turnaround to feel so damned good and happy this morning at the Lake Zurich triathlon. I was even excited for the swim.

Only I have never swum with so many swimmers around me before. This is just my second sprint triathlon after last year’s experiment. The Pleasant Prairie Sprint got converted to duathlon thanks to lightning. I did get in a 750 meter swim the day before, and it went smooth as silk.

That is now how the water feels with 200 other people around you in a shallow lake. Had I not known for sure there were no schools of piranha in the lake I might have sworn that I woke up in a B-Movie where herds of hapless villagers are pushed into dark Amazon waters where they are consumed like tuna steaks while the evil henchmen for an American oil company stand on the shore laughing their asses off that no one will live the tell the tale of their dark doings in the jungle.

Instead, I swam to the outside and out of the piranha chop and caught my breath. There was seaweed thick and clingy but that does not bother me. But it took me nearly 10 minutes to complete the 400 (plus the extra yardage I swam) so the performance was not that impressive.

I made up some good time on the bike. Only one cyclist passed me the entire 15 miles. I was passing people right and left, and I mean that literally.

The run went just as well. I averaged 7:12 per mile without even knowing where we were going. Perhaps next time I’ll study up on that. Have a plan. But when your plan is just to get to the starting line without shitting your pants in some public place, the rest is not that important. The unstoppable Immodium Man plan was Plan A. Everything else was take it as it comes.

And that wrought a 5th place in my age group, which isn’t bad. The Immodium did not quite lead to the podium. I had the second fastest run time of the group. The third fastest bike time. 5th fastest swim. And one terrible transition after the swim that took 3:33. That was because I spent time praying in thanks to God that I did not fill my wetsuit with crap.

It was fun. That is what’s most important to me. My fiance Sue earned second place in her age group and a possible invitation to age group nationals in Omaha. I’m checking to see if they have an Immodium Division. Cause I would rock that.

Christopher Cudworth is a content producer, writer and blogger with more than 25 years’ experience in B2B and B2C marketing, journalism, public relations and social media. Connect with Christopher on Twitter: @genesisfix07 and blogs at werunandride.com, therightkindofpride.com and genesisfix.wordpress.com Online portfolio: http://www.behance.net/christophercudworth
View all posts by Christopher Cudworth →
This entry was posted in Uncategorized and tagged Immodium, lake Zurich triathlons, podium, podium finish. Bookmark the permalink.

4 Responses to Immodium did not quite lead to a podium