Sunny one so true.

I was all set to race in a criterium this weekend. But during the week, for some inexplicable reason, the index finger knuckle on my left hand began to hurt. By Thursday, it was really sore and a red streak began creeping down my the back of my hand. I woke up on Saturday morning with a hot feeling on the back of my hand. I sat on the edge of the bed and gave a long, low growl. I’ve been through mysterious hand problems before. The last one did not go well.

Those of you that have read this blog going back three years know that I picked up a sliver in my left middle finger that turned into major problems. Some sort of infection started and it was threatening to go deep into the knuckle. The hand doctor tried to treat it with oral antibiotics but that did not work. The finger got worse. It swelled. The doctor told me not to panic. Not yet, anyway. “I’ve seen them as big as a sausage,” he assured me. “So you’ve got time.” How comforting.

Then he recommended surgery. I said, “What?”

But that was the conservative measure he recommended to protect the finger. “You could lose the digit,” he intoned.

So surgery it was. They cut open a deep slash and poured antibiotics into the cut, dug around inside the knuckle (I was under anesthesia) and tried to clean it out. I was half expecting them to find some critter in there, such as a mechanical bug planted there by The Agents in The Matrix. That’s how weird the whole thing felt.

Instead, they sewed my finger back together and sent me to “hand therapy.” The primary benefit of that treatment was getting to dip my entire hand during every visit into a vat of liquefied paraffin. That, my friends, is heaven on earth.

So this time around I was being cautious and a bit anxious about the whole hand situation. I booked a late Saturday afternoon appointment at the Immediate Care Center and was seen by a nurse practitioner took my blood pressure. She asked if I had a conditional phobia in which some people fear having their blood pressure checked. I told her that I had never heard of that. I actually love the feeling of that squeezy thing around your arm. It’s like a targeted hug. This time, it read: 107/58. Not bad for the moment.

Earlier that week at the dentist they’d taken my blood pressure and it read 140/100 or something like that. “Are you stressing about something?” she asked.

“Why yes,” I told her. “We’re finishing the sale of my father’s house. There are lots of unfinished financial things to still work out.” 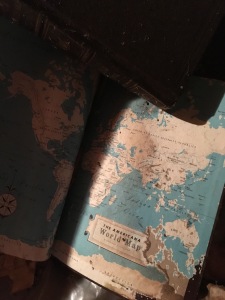 So perhaps my system was weakened by stress and also by having to go into the crawlspace under my father’s house for a final cleaning of the detritus lying around under there. That meant I also had to dig out the Encyclopedia Brittanica volumes holding down the insulation under the living room. They were dusty and moldy and I might perhaps have been bitten by the same spider that got Peter Parker, aka Spiderman. My hand was certainly looked irradiated by Saturday afternoon. It hurt like I’d been bitten, too.

As it turns out, I have cellulitis. It’s nothing to joke around about. I’m taking my meds as prescribed. It’s getting better. But I’m going to take every last one of those pills.

But given all that activity, racing on Saturday was out of the question. Because I was also busy watching my fiance’s daughter graduate from Elmhurst College. It was a really nice ceremony for one of the most diverse student populations I’ve seen in a long time. That made me feel good about the fact that some colleges really seem to get it. They’re working to integrate with the world and it’s not just your football team that matters. Plus the weather was mild and not too windy or sunny. So we didn’t burn, freeze or blow away like other graduations I’ve attended.

Then fiance Sue and her clan took off for Florida to see her parents and share some family time. I’ll be flying down to meet them and am looking forward to that. But by Saturday night, I was sort of cashed.

Then came Sunday morning, and the racing started at 9:00 a.m. But the wind was howling from the west, and driving 25 miles to go race in the wind sounded like a whole lot of not fun. Then at 7:00 I got a text from one of my two best riding buddies. That set in motion the first cycling choice of the weekend.

Instead of our normal 50-mile route we said “screw it” to riding straight into the teeth of the west wind which was gusting up to 25 mph. We rode straight north instead, all the way up to Algonquin, a city on the Fox River deep down a valley road. I was so happy and relaxed riding with those guys. We pedaled south through Carpentersville, Dundee, Elgin and South Elgin. Then we came to the wonderfully engineered new bridge at Red Gate Road and made our way through a neighborhood of million dollar homes where Brian Wilson of the Beach Boys once lived and had a recording studio.

All told we rode 51 glorious miles on a warm yet windy day. 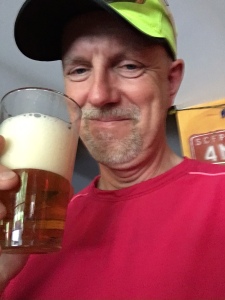 Normally not an IPA fan. But raised a glass. Or two.

After the ride we changed and I took an outdoor shower in the wooden and tile facility they installed outside the house. None of his kids were home that day and even when his wife strolled through the yard shooting poison ivy with herbicide and caught a glimpse of my naked butt I did not care. She is a nurse and has seen more naked butts than she ever cares to admit.

Plus she once had to strip me naked the night after I crashed my bike during the Wright Stuff ride. That all happened during a camping weekend and I was chock full of Vicodin to quell the broken collarbone and needed considerable help getting out of my clothes. I was high as a kite and still in a state of half shock from the accident. Or so they tell me. It was all a half-painful soggy memory of a weekend.

So this time I smiled and waved as she walked by and returned to the patio to drink four IPAs out of the keg my friend keeps tapped. Over the course of an hour or two, we lazily shot the bull while I played with his dog. Then my friend that owns the house smiled and said, “I haven’t done this on a weekend in a long time.” He is one of the hardest-working people I know. A highly skilled lawyer who loves projects around the house as well. So it was nice to see him slow down and chill out.

And that was day one of the cycling choices.

I set my alarm to go race the next morning, Memorial Day. And with all good intentions on Sunday night, I cleaned every square inch of my car with the vaccum and Windex. I placed the bike in the back and loaded up my helmet, shoes and bike pump. All was ready to go for the next morning’s trip to the Criterium.

When I awoke at 6 a.m. the air outside was absolutely still. As I lay there listening to the birds a text came over the phone. “No wind. Any riders?” my friend posted.

For a few minutes, I felt an all-too-familiar guilt as I weighted skipping the crit. But something in me sensed the ride with those guys was more important than the Criterium. I’m racing a duathlon in a couple weeks anyway.

While drinking beer with my riding buds, I tired out Fletcher the dog by throwing his chew toy and a tennis ball. That was his criterium for the weekend.

Today was even more beautiful riding than yesterday. We rode our normal route backward and that was pleasant, like living in an alternate universe. It all made me glad for the cycling choices I’d made. Over the last week, I’ve ridden more than 200 miles and it’s starting to feel really good on the bike. My weight dropped five pounds and there was just one thing left to do to set the summer cycling season on its course.

I came home and shaved my legs. My buddies had laughed and warned me that I had better not go racing any crits with legs as hairy as mine. “You’ll scare people,” they insisted. See, no one trusts a guy racing with hairy legs. They just might be a cycling rube with no experience, and thus a danger to the peloton.

That sums up the funny nature of some cycling opportunities. So many aspects of perception go into this sport.

In any case, this was a great weekend to kick off the summer riding season. The days are still getting longer. So are the rides. We’ll see you on the roads. And pretty soon, at the races.

Christopher Cudworth is a content producer, writer and blogger with more than 25 years’ experience in B2B and B2C marketing, journalism, public relations and social media. Connect with Christopher on Twitter: @genesisfix07 and blogs at werunandride.com, therightkindofpride.com and genesisfix.wordpress.com Online portfolio: http://www.behance.net/christophercudworth
View all posts by Christopher Cudworth →
This entry was posted in Uncategorized and tagged college graduation, cycling criterium, drinking IPAs, hand surgery. Bookmark the permalink.