Are we ready for Concealed Carry for those who run and ride?

Posted on June 13, 2014 by Christopher Cudworth 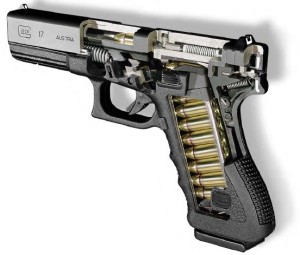 The inside scoop on Concealed Carry is that people really don’t know how the law works.

In 40+ years of running and 10+ years of cycling, I’ve spent thousands of hours on the roads encountering all sorts of traffic and other random ass behavior.

Which has taught me a few things about random ass behavior. One: it really is random. Two: there are quite a few asses in this world.

Things have actually gotten better over the years for those of us who run. Back in the 1970s when I started training on the roads runners were a real novelty. That meant people felt it was funny to lean out the car window and shout things at us. Some even threw bottles at me, or half empty cans of beer. But there was a time….

One enterprising group of kids happened to have water balloons in the car for some reason. If it sounds funny to throw a water balloon at someone considering the fact that a car traveling at 25 mph increases the velocity of that balloon and it realllly hurts when you get struck in the back. I could hear them laughing as they drove ahead down the road but had I had a gun at the moment I would gladly have shot out their tires.

A year after that incident I was running through the quiet little town of Geneva, Illinois when a group of kids hanging out in front of the theater decided to harass me as I ran by. One yelled something about my manhood and I turned and gave him an angry fist pump in return. Big mistake. He came running after me with all 250 lbs of his girth but lost the footrace. Then he jumped in an orange Renault and a car full of them pursued me around the block until one of them jumped out and literally threw a big knife at me.

Had I been armed at that point, I would gladly have shot him in the kneecap.

Then when I took up cycling the threats to my health turned even stranger and more dangerous. People seem to get angry that they have to share the road with a bike. It happens fairly often, usually once a week in fact. Some turbocharged soul drives by with his engine gunning and flips you the bird. A month ago one of them yelled “Get on the bike path!” even though there were no bike paths in sight. Not for 10 miles in fact. Talk about irrational thinking. See, he’d stored up his anger and was just waiting for someone to release it upon. But his anger backfired.

I kept my pace of 20mph and rolled up behind him at the next stop sign. That’s when he pulled his truck onto the gravel shoulder to block my path. So I stopped and said calmly to the open window in the back of his pickup cab, “It’s called a road bike genius. That’s why we ride it on the road.”

If only most encounters ended so mildly. Because quite a few drivers over the years have turned anger into threats. One of my riding companions was accosted physically by a man who first swerved his car at the group of cyclists and then pulled his vehicle to the side of the road, jumped out in front of them on their bikes and threw a punch at a rider while yelling something about “getting off the road.”

That fellow got the worst of it when his punch missed and one of the cyclists responded with a solid punch to his tense jaw. Down he went. Then the cops arrived and the guy who threw the first punched pressed charges. The cyclist who connected was issued a ticket by the policemen who arrived on the scene.

How is that even close to justice? It isn’t. The aggressions shown toward cyclists and runners don’t always ends in fist fights or thrown knifes. But those are genuine threats.

What also constitutes a threat? Is driving too close to cyclist a threat? Passing inside of three feet of a cyclist with a vehicle is against the law here in Illinois. But what is the implication if along with passing too close a driver lays on the horn loudly and hollers a threat or makes an obscene gesture. How do we determine if that is intended as an act of violence toward those innocently using the roads for transportation or recreation.

If we abide by the Concealed Carry laws now in effect in 50 states, one could legitimately argue that in such circumstances a cyclist or runner would have the right to defend themselves. If you carry a firearm and perceive yourself to be at risk for physical harm or even death, it is technically your call on how to use that firearm. You could shoot out the tires of a truck or car whose driver showed open aggression toward you. Or you could shoot the driver who jumps out of their vehicle brandishing a knife or throwing punches in your direction.

The fact of the matter is that very few people really know the law as it pertains to these situations. If those actions stemming from Concealed Carry are not lawful, then they must be delineated through firearms education.

A story on CBSLocal.com outlines the poor understanding of how Concealed Carry laws really apply. “Even McCarthy (a state police officer) who has been one of the most vocal critics of the law allowing Illinois residents to carry concealed firearms in public, warned there will be confrontations that could escalate into a deadly shooting – similar to January, when a retired police officer shot and killed a man who had been using his cell phones during the previews at a movie theater; or when a Florida man shot four teens – killing one – during an argument over loud rap music in 2012.”

So it is not some theoretical issue that those who run and ride might want to protect themselves. One could definitely understand the reasons why a woman might want to carry a pistol to protect themselves while running. The risks of rape or harassment are indeed real in many locations. So if a woman runner or cyclist pistol-whipped a potential rapist how would the law determine if his intent were real or misunderstood? Our culture and especially politicians clearly struggle with understanding rape and how to interpret what actually constitutes rape.

My own violent fantasies have often escalated when threatened by crazed drivers. Sitting there on your bike at a stop light while some deranged guy yells epithets at you can make you feel pretty vulnerable. And pretty angry. And if that guy gets out of this truck with a weapon of some sort, even a hammer, what is there to defend your honor and well-being except a bike pump and maybe a wrench?

But if you whip out a pistol things get even real quick, don’t they?

Now I’m not a gun advocate. I think Concealed Carry laws are nuts. The fact that we have them in all 50 states is testament not to the intelligence of our culture but the power and ability of the most stupid interpreters of the Second Amendment to threaten and cajole the public into approving of Concealed Carry. They have played on our fears and our most aggressive instincts, and plied the political process with money and threats to the point where justice can no longer be managed or served.

That’s because the type of guns and the number of them now available far outstrips the Second Amendment law that says our nation shall have a well-regulated militia. The Second Amendment does not, as gun proponents like to claim, guarantee absolute freedom to own weapons without restrictions. A well-regulated citizenry must absolutely protect against the establishment of vigilante justice, which is where the laws providing Concealed Carry now rest. More Americans have been killed by gun violence than all the soldiers who have ever died in American wars on foreign soils. We’re literally at war with ourselves. All because of the fantasy that guns protect our freedoms. It’s a violent farce. A black comedy. We see proof of that every time a new rash of gun violence and mass killings breaks out. It will never stop unless we hold the Second Amendment to its promise of a well-regulated gun culture.

See, right now the balance is tipped heavily toward those who love to own guns and see them as the great equalizer in society. And we all expect as a rule that gun owners abide by the law. But what does that really mean? If self-defense is that important to society, what if it starts to get turned on its head by the weakest elements of society such as cyclists or runners who simply want to Share the Road and keep getting threatened by those who don’t know how to abide by the law. A vehicle can serve as much as a weapon as any gun you might want to own.

So it is interesting to think about the surprise of some gun-toting pickup driver jumping out of his F-250 with angry threats toward a cyclist for riding on the road only to face the barrel of a dark little glock pistol held by a lycra-wrapped cyclist with blood-red eyes behind his Oakley shades. “Get back in your fucking truck right now,” the cyclist would growl. “Before I give that ugly tire around your waist a permanent flat.”

Oh, the violent joy in that would make the papers indeed. But would all those traditional gun lovers love the tale? Or would they accuse some liberal candy-ass cyclist wearing a stretchy outfit and bright colors of taking liberties against someone with more rights to the road. Would the conservative faction of this nation jump to the defense of the motorist as having more rights than the cyclist? Or would the conservative crowd find merit in the idea that freedom means freedom for all, not just those with motorized wheels? That’s the tarsnake of all this Concealed Carry stuff.

Those are questions yet to be asked or answered. But perhaps it’s time someone took a shot at it. Because that’s how America rolls.

Christopher Cudworth is a content producer, writer and blogger with more than 25 years’ experience in B2B and B2C marketing, journalism, public relations and social media. Connect with Christopher on Twitter: @genesisfix07 and blogs at werunandride.com, therightkindofpride.com and genesisfix.wordpress.com Online portfolio: http://www.behance.net/christophercudworth
View all posts by Christopher Cudworth →
This entry was posted in Christopher Cudworth, Tarsnakes, We Run and Ride Every Day and tagged concealed carry, cyclists with guns, glock, gun laws, gun-toting pickup drivers, guns and self defense, NRA, pistol, rape and guns, rape and self defense, runners with guns, Second Amendment, self defense. Bookmark the permalink.

6 Responses to Are we ready for Concealed Carry for those who run and ride?