The muscle of evolution 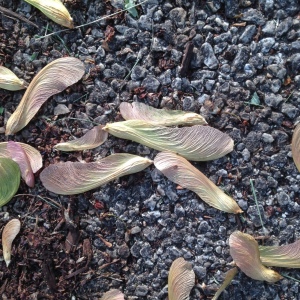 As a little kid you’re often more closely in contact with nature. Given the amount of time you spend on or near the ground, playing in dirt and among acorns and ants and thistles, you get a better feel for being connected to the earth.

One of the distinct impressions that has stuck with me all these years is how much the bulging end of a maple seed resembles the muscle in a human bicep. As a skinny kid I always wanted stronger biceps. In fact I yearned for strong muscles of all types. As a young runner it was painful to go to track meets where the ripping calves and shoulders of sprinters made me feel weak and winsome.

But we’ve all evolved for different purposes, haven’t we? The skinny frame I inherited through genetics proved to be decently suited for distance running and endurance sports. It was the very lack of muscle on my frame that proved to be a strength competing in races from a mile to a marathon.

How ironic that nature, for all its supposed emphasis on strength in the survival of the fittest should also accommodate those with a talent for endurance.

Long ago (or not so long ago depending on how you look at it) human beings evolved the ability to walk upright.

Bipedalism gave us distinct advantage in some ways. Our eyes were raised above ground level. Our bipedal locomotion actually combined with a slowly evolving larger brain to make it possible for us “humans” to look around, get around and think around problems faced in daily living. It’s even more interesting that our bipedalism has evolved one step further into the bipedalism of cycling. We’ve equipped our own evolution with remarkable tools to make life easier. 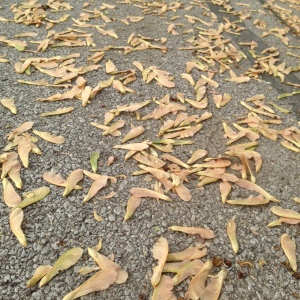 But like all things evolutionary, it is seldom one factor that makes an organism successful. The fact that we stood up and started to think was no guarantee of survival. The Neanderthal race of human beings went extinct perhaps through factors of competition.

That means they might have been muscled out of existence. But again, it doesn’t mean they were the weaker race. Evolution is notably specious in who survives and who does not.

So we must be careful how much joy and compliment we confer on the apparent “winners” in life. The very people we grow to admire most may be the worst examples for our own success. That’s why publications such as People magazine are so fascinating. They are chock full of stories of success and failure. If you want evidence of human evolution up close and personal, just read People magazine or Us or even the Wall Street Journal. It’s all about determinism. There is not a second goes by that we are not evolving as a race in some way.

We know that this occurs in fits and starts however. The people who populated North America long before European settlers arrived to turn the place into a giant strip mall were likely locked up in a region where the Bering Strait now exists. Once the seas rose and an Ice Age receded the residents were forced out of an area that served as home for perhaps 10,000 years. Through environmental pressure and breeding, their descendants diversified into a wide range of civilizations ranging from the Inuit of the North to the people who built Machu Picchu in South America.

Some of us were taught to think it all started in the Garden of Eden about 6-10,000 years ago. That vision was off by a continent or so and about 350,000 years. Those who don’t take the Bible literally can conceive that at some point Middle Eastern culture assimilated its creation myth on the collective wisdom of people who maintained a self-concept through oral history. To think otherwise is simply shortsighted and perhaps even stupid. Cutting the Bible or any other Good Book off at the knees by taking it too literally is an eclipse of the power of human imagination. It may also be shutting our eyes to the wisdom of God.

Even the great teacher of Jesus Christ made use of organic symbolism to teach about spiritual concepts. He did not limit himself to the legalistic vision of self-concept around which the religious leaders of his day had built a controlling religion.

What we now know from genetics and anthropology is that the descendants who populated the Middle East emigrated from tribes of hominds that evolved in northeast Africa. The myths that fill the Torah and the Bible and the Koran all describe major events such as major floods and other highly memorable tectonic or meteoric events. Our comprehension was necessarily limited because human beings simply could not conceive of their position in the universe any other way. Everything that happened out of the ordinary constituted a miracle of sorts.

But human culture proved both remarkably adaptable and highly susceptible to our collective foibles. We successfully invented agriculture and then expanded on that concept through industrialization. We jammed our holiest forms of knowledge into various forms of scripture and started to fight about whose vision of creation and salvation was the best. These horrid fights continue to this day.

It’s all part of human evolution, for competition drives it all. The will to compete and survive is hard-wired into the human race and will never go away. The diverse outlets of athletic competition help us vent our animal instincts in many ways.

But let’s face it: competition for space and control is still at the heart of every human conflict. The fact that some people do not think they can exist without guns for protection is just one illustration of the evolutionary question. Are those people better evolved in making use of a murderous tool for protection? Or are they less evolved in having to depend on that tool for security?

We can’t even interpret the US Constitution with any clarity on such matters. The truth is that human evolution is full of ambiguity.

Those of us who run and ride are trying to evolve within our own spectrum of existence. We pass along our experiences in hopes of forming a tribe of people who share in similar enlightenments. We wish others would appreciate the benefits of that lifestyle. Yet we’re stunned to realize that many people don’t care if we even exist. Some would prefer to even wipe us out. They call our endeavors arrogant or frivolous. And we have to take that criticism into account because they just could turn out to be right.

We don’t really know. No matter how many ways you attempt to prove yourself a higher being in terms of evolution there are moments when you discover your own weakness and frailty. It’s there every second of every day. We compete and we fail. We get injured and grow older. We love and we lose.

But we also experience moments of extreme joy and triumph through this process of evolutionary experimentation. We build muscles and self esteem. We build friendships and trust and hope in the human condition.

We move through the seasons from summer to fall to winter to spring and the seasons of despair and renewal affect us all. We shiver at the polar vortex and worry at the increasing summer heat. Could we in fact be messing up our own nest, this place we call earth?

Then we walk out in the spring wind and find ourselves engulfed by a shower of maple seeds showering from the trees. They fall and twirl like helicopters through the air. They pile in masses and penetrate our carefully mown grass with their heavy seedheads. It is a perfectly evolved strategy for propagation. The wing that carries the seed down gently from the tree will quickly defray and fall away. The seed is left to slip toward the earth where it can get soaking wet and germinate. Then little maple trees begin to grow. 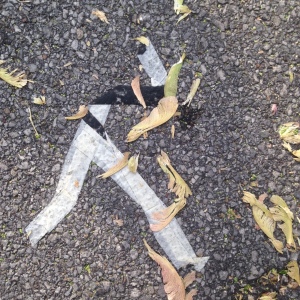 The trees are not so very different from us, you see. They muscle their way into existence any way they can. Whether we accept it or not, we evolved from seeds of the human race, and have been distributed in much the same way. Our family tree goes back to roots of people we might barely recognize.

Some see them as too potentially inferior to reflect on their own being. “We didn’t descend from monkeys,” the non-believers have been known to say.

Our genetics tell us otherwise. The maple seeds of DNA are driven into our bodies and our souls. We can see them in the muscles of our biceps and the formations of our bones. We are exactly like those that came before, and yet we are also always evolving. Life is nothing but change. It revolves and challenges our conceptions like a maple seed borne on the wind. It is ours to see that, and to seed that in the choices we make in this life.

We can choose to ignore it, but to our peril. Or we can choose to expect it, and run and ride driven by the knowledge that we’re trying to make ourselves into better people. That’s the muscle of evolution at work.