All over the map

Posted on July 12, 2018 by Christopher Cudworth 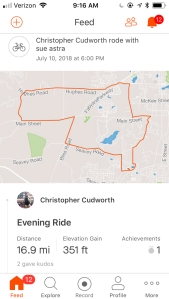 It likely goes without saying that I don’t have a “plan” for this blog in terms of editorial content. Although I subscribe to some blog advice newsletters, and even paid for a yearlong seminar that I never used, the reason I write this blog is to feel connected to the things that matter to me in this world.

I always hope that the people who read this blog feel connected to what I write about. Certainly that works the opposite way too. My Follower numbers drop whenever I breach some political line that they don’t like. That’s how it works. If you’re honest about what you think, some people will eventually get offended.

Once in a while I give advice. But I don’t actually coach anyone directly, unless asked. I took the Road Runners Club of America Level One Certification class and missed passing the test by something like 1%. I could have taken the thing again for another $30, but was disgusted enough by the results (my own failure at test-taking) and the content (the test was a ridiculous thin and brittle exercise) that I just let it slide.

I regret that somewhat, because with that certification I might be coaching other runners now, because that’s something I do like to do. But perhaps deep down I realize that my writing (I’m working on two books) and art/painting (I have a solo show in September) really should take precedence in life.

So while it seems like I’m all over the map in some ways, in other ways, at a subconscious level perhaps, I’m maintaining focus.

But there are some writing projects and recent blogs that I’ve converted to pitches with running, cycling and triathlon magazines. I know my work is good enough when it is fully edited to be published. So this blog is like practice for that work. I try things out just like we try things out in running, swimming or cycling. Some of them work. Some don’t. We learn from them and move on.

The other night while riding with Sue, I was feeling a bit oatsy because we’d raced two days before and my Sprint Triathlon didn’t exactly exhaust me. She called out, “You can ride ahead, I don’t mind.” 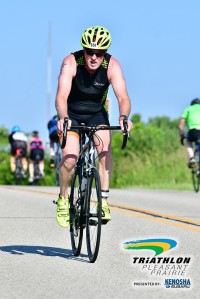 So I turned onto a sleek little road called Wenmoth and hit the higher gears for some speed work. Sue gave me her other Garmin to use from now on. I have not ridden with a cyclometer in more than two years. It was fun to be able to look down at the numbers and get empiric feedback again.

At 27 mph the bike was humming along, so I wanted to see how long I could keep that pace. It’s humbling to realize the Tour de France riders cruise along at that rate for more than 100 miles. In fact I think they average that pace over the entire length of the Tour. That includes the massive mountain stages when they’re only going 11 mph up a 12% grade. That is flabbergasting to me. Such talent and strength.

Toward the end of the ride Sue and I came back together and she asked, “Was that fun?” And indeed it was. I was fully living in the moment. We’d covered a mere 17 miles on our ride in just under an hour. When finished, I pulled up the Strava app (it will soon connect with the Garmin)  and found that it showed 1/10th less of a mile than the same ride earlier in the week. Huh, I thought. Wonder where that 1/10th mile vanished?

It shows that even when we’re riding or running or swimming in what we consider exacting fashion, we’re still all over the map. Our exactitudes are illusions. Perceptual dreams. Made up notions. Inventions of the mind.

Some go a step further and insist that nothing we do is under our own control. There are times when it feels like the cosmos is directing things, or God is shoving us one way or another. But I don’t believe God is a control freak. I believe God is all over the map, in fact. 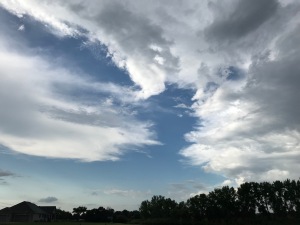 Which is why I don’t hold myself to too many editorial strictures on this blog. It’s about freedom of thought and expression. We Run and Ride has been going on for more than five years now. Original thoughts on running and riding. That’s how it started. And now swimming.

Probably millions of words typed into this and many other computers. Hundreds if not thousands of missed edits, too, and I always cringe. ADD sucks. So does hurrying at times to post a blog before work or before bed. But for all its flaws, this little blog is mine. It is heartfelt if it is not genius. It is also honest even if not entirely worldly-wise. That’s the tarsnake of putting it all out there.

And it goes along with me wherever I go. That truly is all over the map.

Christopher Cudworth is a content producer, writer and blogger with more than 25 years’ experience in B2B and B2C marketing, journalism, public relations and social media. Connect with Christopher on Twitter: @genesisfix07 and blogs at werunandride.com, therightkindofpride.com and genesisfix.wordpress.com Online portfolio: http://www.behance.net/christophercudworth
View all posts by Christopher Cudworth →
This entry was posted in Christopher Cudworth, cycling the midwest, PEAK EXPERIENCES, we run and ride, We Run and Ride Every Day, werunandride and tagged blogging, original thoughts on running and riding, tarsnakes, we run and ride. Bookmark the permalink.