Posted on June 19, 2017 by Christopher Cudworth

The advent of the modern day bicycle trail with its twelve-to-twenty foot width has created wonderful opportunities for runners and cyclists around the world to enjoy dedicated exercise space. But for the most part, these same trails constitute a “shared space” that requires a bit of communication to manage properly. 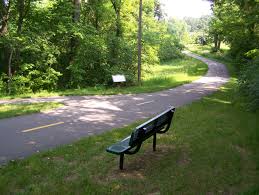 Not every bike trail is as clearly marked or spacious as the section of trail seen in the accompanying photo from the town of Glen Carbon, Illinois. That’s where one of my best friends from high school lives, and these trails loop right behind his house. From there, the trail connects with a bike trail system north of St. Louis that is just phenomenal. I’ve ridden 40 milesalmost without interruption in terms of cross traffic or crowded conditions.

Yet for all this infrastructure, safety on the bike path comes down to human consideration. The principle at work is simple: Cyclists generally move faster than runners or walkers. So the proper etiquette for cyclists when approaching runners or walkers from behind is to warn people ahead by calling out “On Your Left!”

This includes every kind of cyclist. Slow or fast, one must call out “On Your Left” whether traveling 10 or 25 mph.

Which brings us to the other facet of this subject. What should the expectations be for cyclists on a trail? How fast should you expect to go if the trail typically attracts a fair amount of foot traffic?

The etiquette for sensible speeds on a bike depends on several factors. Much is determined by the width of the trails in question and their context relative to urban, suburban or rural conditions.  The actual physical construction of the trail also counts for quite a bit too, especially whether it is paved, gravel or other surface.

In urban conditions with busy two-way traffic, cyclists musts be prepared to communicate with pedestrians in clear instructions. Remember that not all trail users are accustomed to dealing with bike traffic. Some may not be aware that they should stay to the right and even proceed single file on a trail busy with runners and bike traffic. Calling out “On Your Left!” in that circumstance may cause people to startle, stop, or even go the opposite direction. 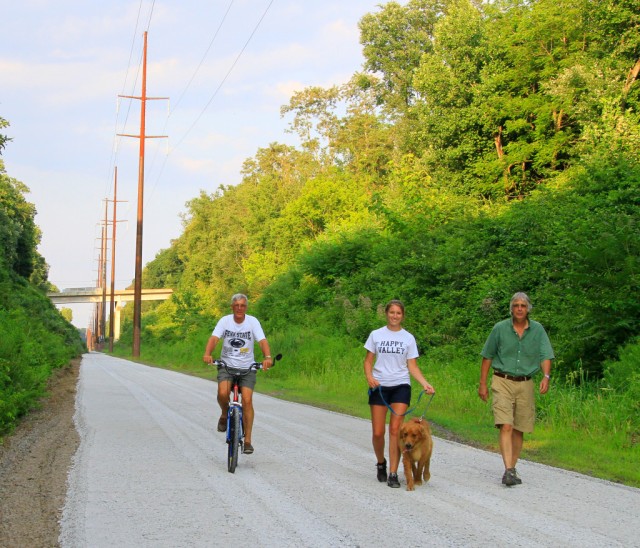 That means cyclists must err on the side of caution in areas of busy foot traffic and other bicyclists. Accidents happen when people do not have enough time to react, misjudge the intentions or direction another person intends to go, or enters a situation going far too fast to adapt.

A skilled criterium cyclist might welcome such challenges as a test of skill. And while a good bike handler can ‘thread the needle’ in almost any circumstance, it does not mean it should be done. A bike moving at a fast speed is genuine threat to people on foot. Approaching too fast or buzzing too close is definitely an affront and can cause genuine fear or be an offensive distraction to other people using the trail. Expert cyclists should actually know better than to ride on through a trail section where foot traffic is common. Better to take that unbridled speed out on a lonely road. It’s not worth showing off your bike handling skills on the trail. All people will remember is that you were an asshole.

In suburban areas where running and walking traffic is less congested, it is acceptable for cyclists to dial it up a bit. But remember that suburbia is full of pitfalls for cyclists and runners. Blind corners due to shrubbery are common. Tearing across a side street on a bike trail is risky at best and flat-out dangerous. A regional bike trail here in Chicago covers 25 miles in a loop that crosses through six different towns. It rises up on former railroad beds and drops down to street level almost without warning. People pop out from side trails. The surface itself is often crushed gravel, which makes stopping or swerving a dangerous proposition. Road bikes can be a perilous ride on such surfaces.

But it’s the quiet spots that offer the greatest startle factor when a hard-riding cyclist approaches a runner from behind on a mixed-use trail of that kind. Quite a few people run with headphones on, which can make it difficult for cyclists to warn runners when riding up from behind. In some cases it is wise to slow slightly, issue an initial warning and if space and approaching traffic is absent, swerve well into the other lane or side of the trail. Some runners jump to the side when startled.

It is particularly important to give women runners and walkers fair warning when approaching from behind. There are enough instances of threats, harassment or genuine attacks on women runners that the etiquette factor for anyone seeking to pass a woman runner or walker from behind must, out of courtesy at least, offer a clear and honest “On Your Left” from thirty feet back to avoid an unkind startle factor. 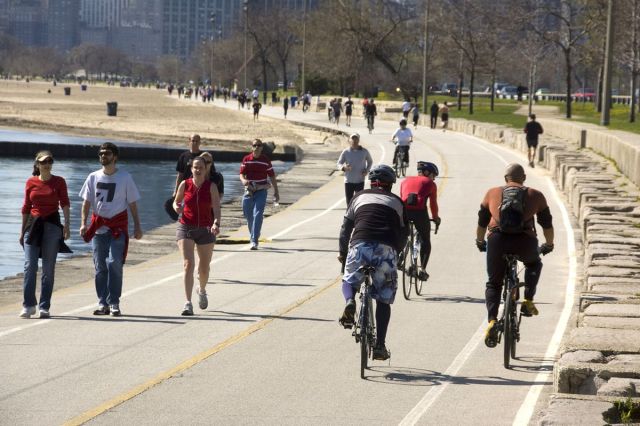 Some of these guidelines seem so basic and full of common sense. Yet there are plenty of cyclists who ignore the basic rules of the trail when it comes to etiquette and respect. As noted, it is some of the fastest cyclists that are the worst offenders.

So back off on the speed on busy trails, and get a grip. Bike trails aren’t really meant to accommodate speedy road cyclists. Yes, the risks of riding out on the roads are greater. Many motorists seem to think that cyclists don’t have a right to the road. They think that all bike riding should be done on bike paths. But they are legally and conceptually wrong. That education process may take another 10-20 years here in America.

Face it, no matter where you ride with the exception of the most remote bike trails or country roads, there are human obstacles to consider. Even way out in the country, a group of cyclists should know it is best to warn fellow riders that there is a runner ahead on the theroad. It’s never desirable to bury a tire up someone’s butt crack because someone was to busy and selfish to call out “Runner up!”

And remember, ’tis the season for tarsnakes. Stay level my friends.

Christopher Cudworth is a content producer, writer and blogger with more than 25 years’ experience in B2B and B2C marketing, journalism, public relations and social media. Connect with Christopher on Twitter: @genesisfix07 and blogs at werunandride.com, therightkindofpride.com and genesisfix.wordpress.com Online portfolio: http://www.behance.net/christophercudworth
View all posts by Christopher Cudworth →
This entry was posted in cycling, cycling the midwest, cycling threats, Tarsnakes, we run and ride, We Run and Ride Every Day. Bookmark the permalink.