What’s your Call To Action when you run and ride?

Posted on September 25, 2013 by Christopher Cudworth

In marketing terms, the Call To Action (CTA) is a crucial element in motivating potential customers to make a purchase or download information about your company.

Considerable time and effort is given in website marketing and Pay Per Click marketing to leading customers through the process of engagement to placing an order or making a call. That process is called “conversion” which simply means you’ve moved a customer from an interested party to someone who’s actually responded to your message.

We find Call To Action at work in all kinds of day-to-day circumstances. The classic formula of most pop songs, for example, relies on a variable pattern of main lyrics, chorus and refrain. But the Call To Action of most pop songs is the hook. That’s the part that won’t go out of your head after the song is done playing. Some of the most famous hooks in history are found in songs like the rolling guitar riff in the Beatles’ “Norwegian Wood” or the quick chord progressions in Steely Dan’s “Reeling In the Years.”

Hooks are a call to action to listen. We can’t resist their infectious rhythms or melodies that appeal to some crazy core in our souls that reacts to primal sounds.

The Hook That Sells

That’s why music has long been used to sell products. Hooks are something people remember well, and they can even draw out emotions in people. When emotions get recruited into the Call To Action formula the buyer and seller begin to share a common language. That’s why the genre known as rock n’roll music has lasted more than 50 years. Rock goes straight for the gut with hooks we cannot forget.

Watch Out For the Flatted Fifth

Some people have questioned the motives in the Call To Action in rock music. Sex and drugs and rock’n’roll have common roots, you might say. When rock first hit the scene in the 50s it was considered the devil’s music. The Flatted Fifth or the augmented 4ths is called The Devil’s Interval. But the chord and its use goes way back in musical history, and could get you killed for playing it at some points in time. But we are redeemed by Beethoven, who used a variation in the famously impactful Dah dah dah daaaaahhhh that introduces Symphony No. 5 in C Minor. Talk about your Call To Actions!

Rock is Call To Action personified

Rock just took some of those timelessly evil musical tools and emphasized them for emotional impact. 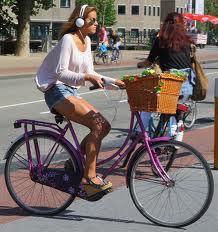 So it’s no wonder so many people like to listen to rock music while they run or ride. Their music is filled with Call To Action riffs and hooks and motivational gut checks that match your heart rate in tempo or make it go faster. Music is your drug, your fuel and your Call to Action. It is also your companion. Add Some Music To Your Day.

Selling Yourself On Your Workout

But you probably never thought of it as a form of marketing exercise to yourself before. But its true. We all need to motivate ourselves some way and the pleasure-seeking brains of those who run or ride are just as susceptible to the marketing message, however subliminal it may be, that we are our own commercials for success. Now get out there and rock a few miles. 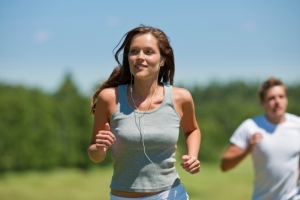 But be smart. There’s a risk to rockin’ our way through our runs and rides, or our morning commutes. We can’t always hear the world around us, and that holds danger. You’re not fit for anything when you’re mangled or dead. Even Heavy Metal bands have to admit that much.

With additional comments by my co-blogger, Monte Wehrkamp, a bassist in the group What’s On Tap.

Flat five, flat seven, there is no blues without those two notes.

Where they came from? Africa. The African chord system, which wasn’t a system or theory, per se, was the sound in American black slaves’ heads. Just like how Indian music is atonal to western ears, but makes perfect sense to an Indian.

Add the backbeat. Slaves took American religious music and gave it rhythm. But instead of clapping on 1 and 3 (in 4/4 time, as white ears hear music), they subtly rebelled, clapping on 2 and 4. The African-American Spiritual musical movement was born.

One-TWO-three-FOUR, one-TWO-three-FOUR. Flat the five. Flat the seventh. You’ve changed music forever. It’s the greatest gift America has given the world, in my opinion. The blues. When it mashed into Irish and Scottish music played in the hollers and the hills by poor white immigrants, we got bluegrass. Which begat country-and-western (the real stuff, see Patsy and Johnny, et al). The blues added to poor white boys from the deep south begat rock ‘n roll (Buddy and Elvis, etc). And that floated across the pond to post war English kids and we got the Stones, Beatles, Clapton/Cream – a British invasion.

All of a sudden, the rebellion that was the African-American Spiritual and the blues became the rebellion music of people of all colors and backgrounds. The anti-war movement. Anti-government protests.

Music — it meant something more than notes and beats and lyrics. It was in our blood. It was our conscience.

Too bad that today, occultism and computers and corporatism have pretty much strangled the meaning of music to death. Anything mainstream by the big record labels, whether it’s Miley or Brad Paisley or any rap act has been compromised and tinged with insincerity and inauthenticity. Now America exports trash. And we get back Gangham Style from South Korea. Ugh.

Christopher Cudworth is a content producer, writer and blogger with more than 25 years’ experience in B2B and B2C marketing, journalism, public relations and social media. Connect with Christopher on Twitter: @genesisfix07 and blogs at werunandride.com, therightkindofpride.com and genesisfix.wordpress.com Online portfolio: http://www.behance.net/christophercudworth
View all posts by Christopher Cudworth →
This entry was posted in Mechanical Genius, We Run and Ride Every Day and tagged 10K, Add Some Music To Your Day, Bicycling, bikes, biking, Call To Action, Christopher Cudworth, competition, content marketing, cycling accidents, cycling psychology, Cyclist with headphones, marketing terms, riding with headphones, rock music, rock music as motivation, runners listening to music, running with headphones, we run and ride, werunandride.com. Bookmark the permalink.

1 Response to What’s your Call To Action when you run and ride?